Like the blog for Cold Wars, I will try and post every day and hopefully several times a day to give you the scoop on what's happening @ the biggest War game convention in North America - Historicon 2012.

Saturday July 14 [-5 days]
Here are the Games we will be running.. ODGW Games

And here is the convention floor layout...

Well time sure flies.... I'm home scurrying around and getting the last minute things packed and set to leave bright and early tomorrow. Bob B. and I will be carpooling down (I hate to drive!!) and look to arrive around lunch time.

I wanted to give a shout out to "Walt" for putting together the Official Historicon Guidebook app. This is a must have digital program for the convention. I think it's great!!

First of, what is GUIDEBOOK? This is an application, or "App" in hipster parlance, that resides on a multitude of mobile devices (Ipad, Ipod, Iphone, Android smartphones, Android Tablets, and there's even a version for browser enabled phones that can access the web). GUIDEBOOK maintains a master schedule of every thing going on at a convention, Maps where everything is, general information about the convention, plus maintaining a custom version of your own schedule that keeps a list of all the things you want to do when you go to a convention.. and reminds you when you when it's time to do it. Think of it as your, extremely personalized version of the paper program guide that can store on a handy device, beeps you when it's time to go to the next item on your schedule and keeps a to-do list for you.

As usual, I've posted a "How to get it, how to use it" blogpost for this GUIDEBOOK APP. Here you are: Historicon guidebook

Thursday July 19 [Day 1]
"WE"RE HEEERRREEE....."
Bob and I arrived around noon and started setting up the room. Tu / Mike / and Gregory all filtered in by 3pm and we had the dealer hall space set up and the room done. 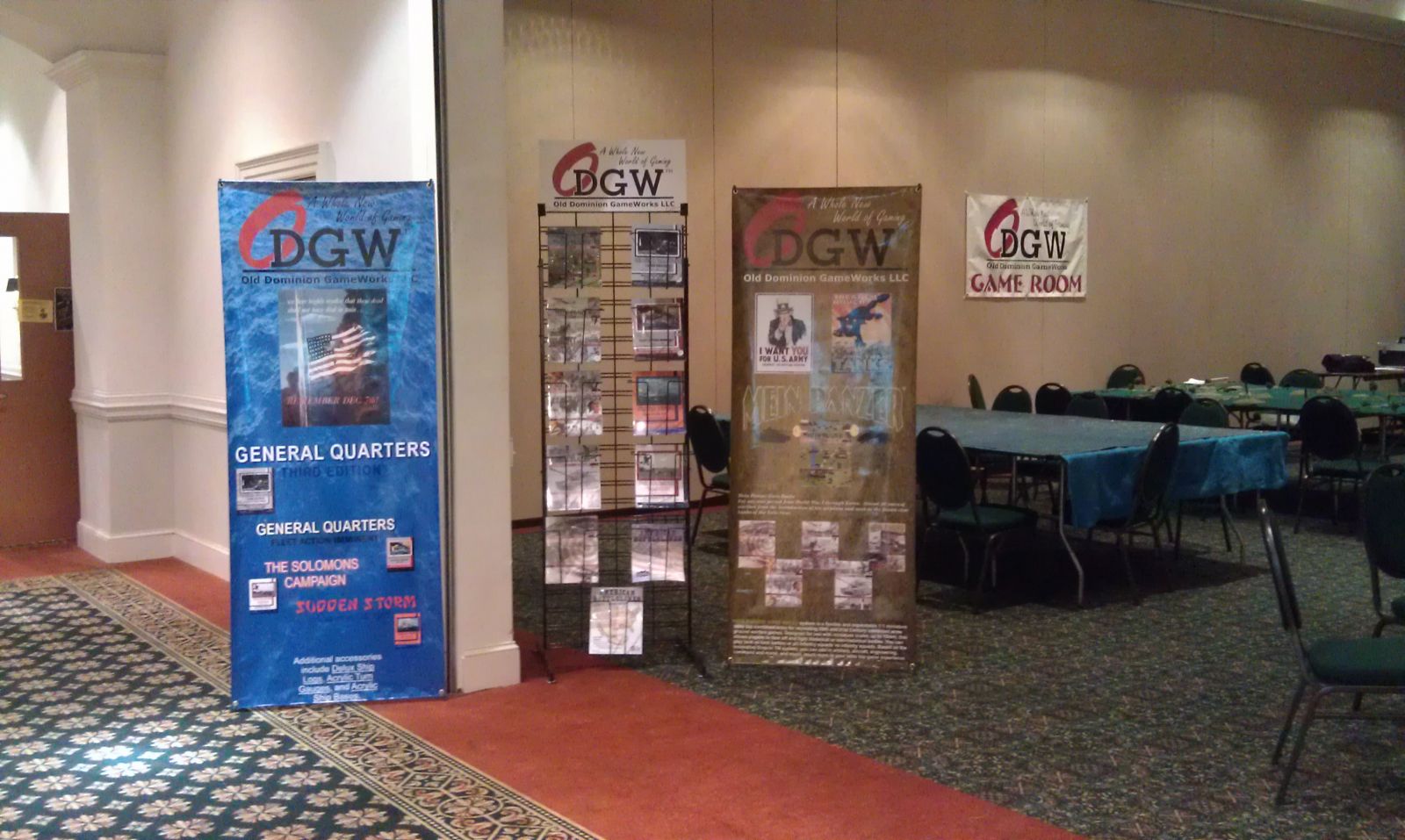 Little Guy G. ran a Mein Panzer for Kids game and Bill B. ran a GQIII game that both went off well.

Mike M. hosted a zombie game playtest for the staff and that was a blast. We had character players that had to cross a table and recover a power generator and radio to call for rescue. The table of course had zombies and "potential" zombies all over the place.
One turn I inadvertently spawned a zombie close to Tu's character and it attacked him. The next turn when it was time to spawn zombies, Tu rolled and placed a zombie next to my character!! (I told Tu not to do that or I'd return the "favor") My turn to roll the dice.... YES!! I rolled exactly what I needed to put a zombie in front of Tu's character. Again the entire table erupted in laughter. (note - Neither zombie did any damage as both were "eliminated" before they could attack.) 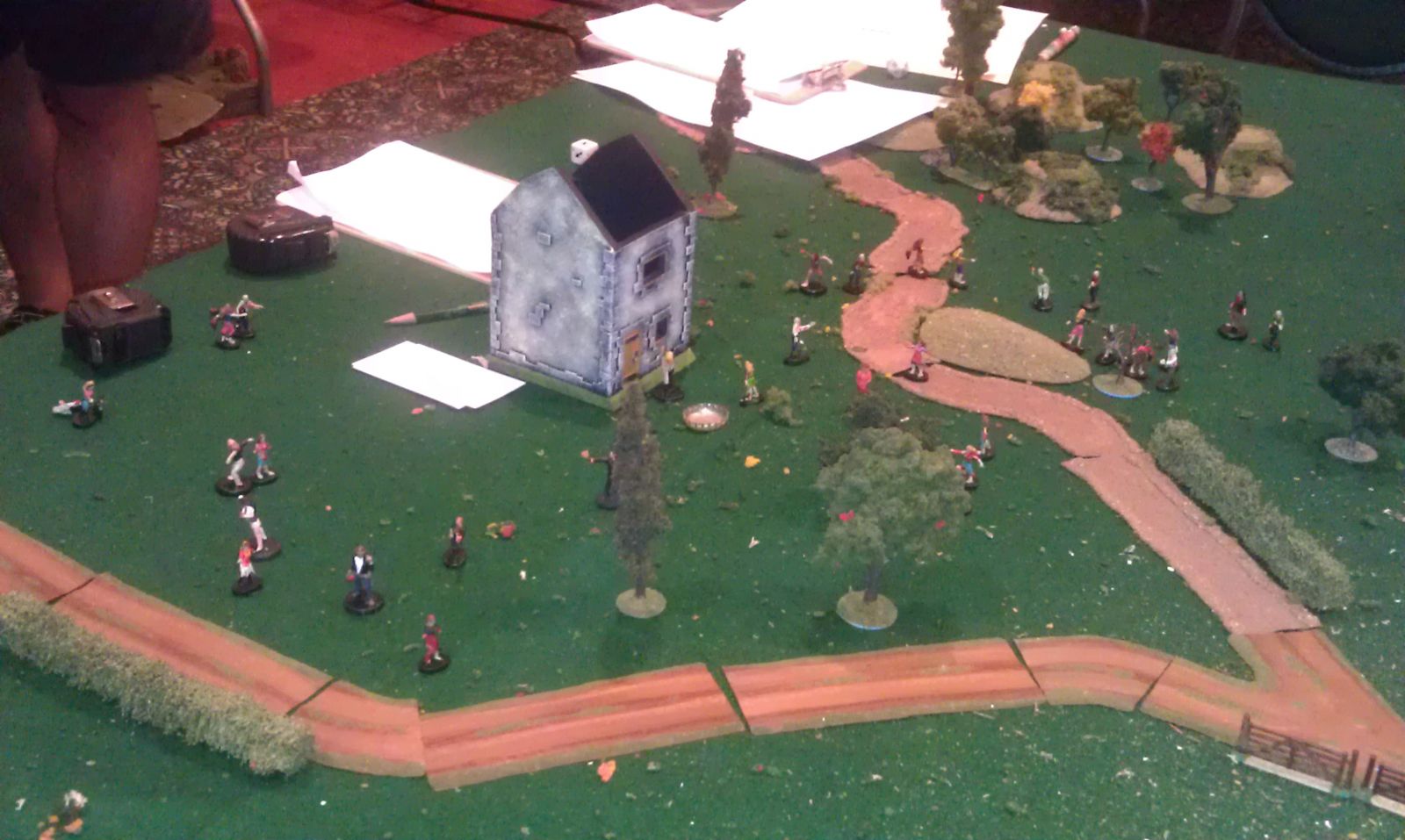 The Dealer hall was filled up all day. The Game rooms were not so full. However everyone was active and having a good time.

I have a gallery set up an pictures from today. Go and take a look.

OK it's Friday, day 2 of the convention. All is going well, the morning games were all full. We had 2 GQ III games and a Mein Panzer game and all were full with gamers. Bob's Korean war game was a blast. I hope to get an AAR published soon. I have been going around and taking lots of pictures. Be sure to go to the Gallery to see the pictures. More to come. 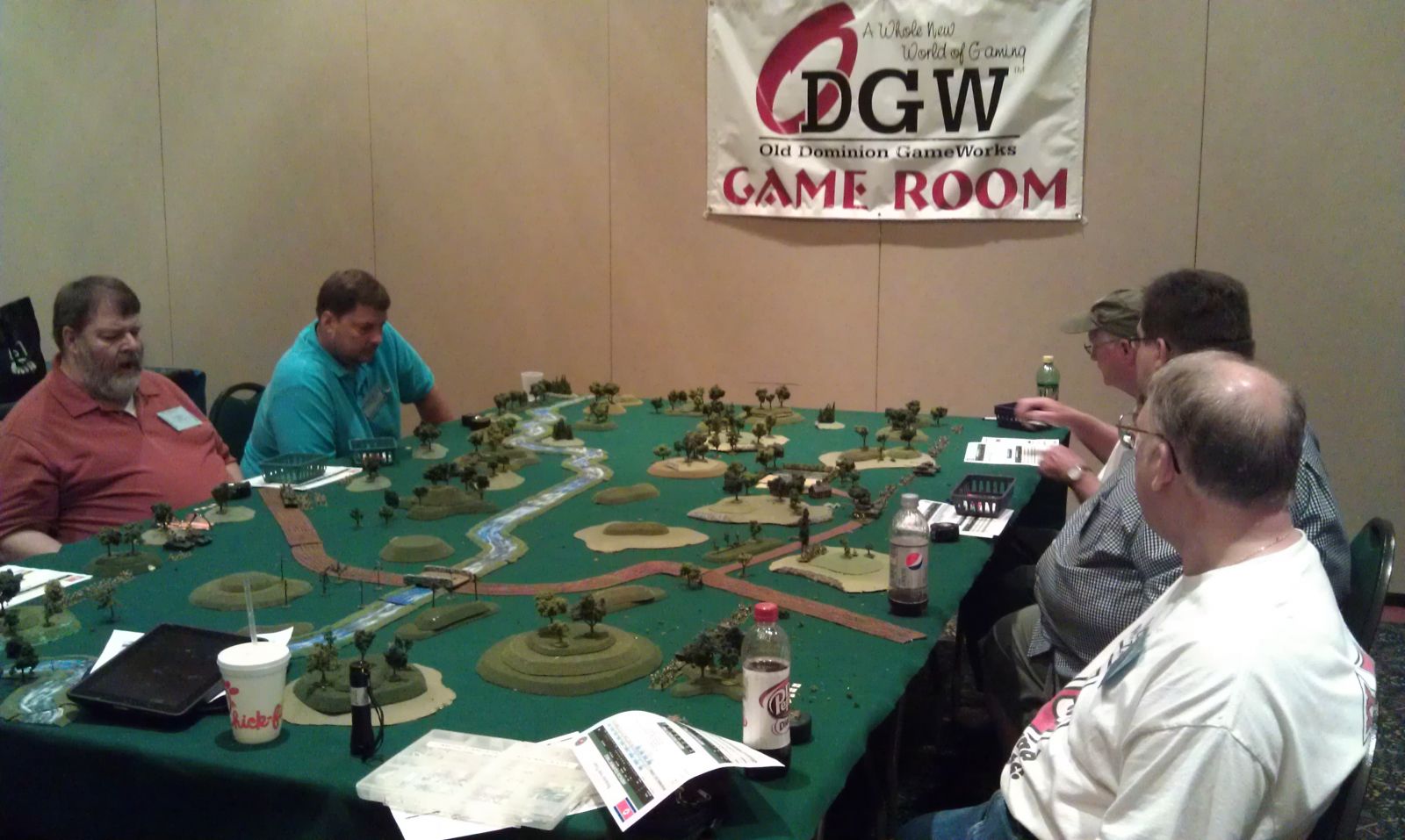 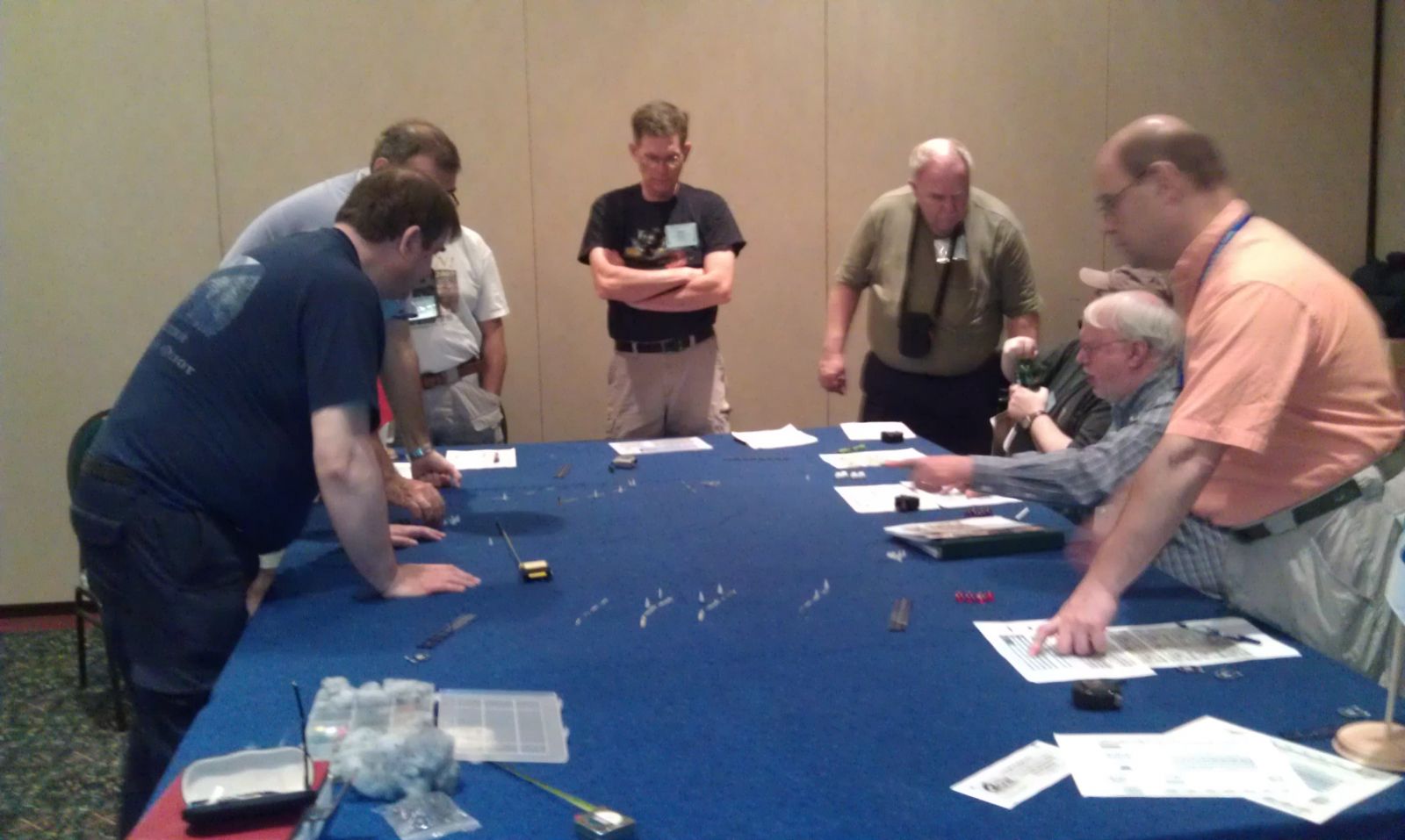 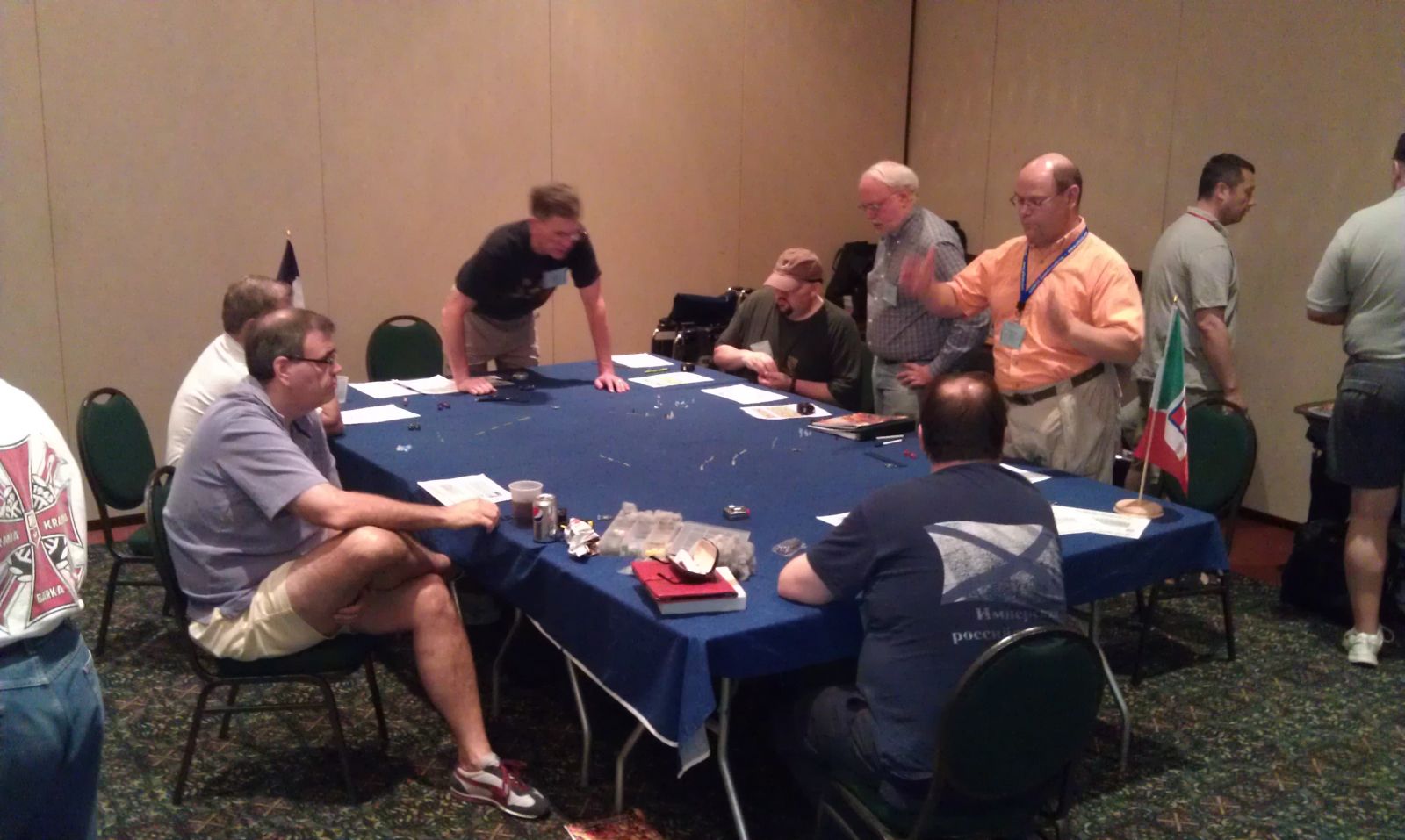 The afternoon games went well. The GQIII games were full. Gregory reported having to turn people away. (This is a first as far as I can remember.) Mike ran an MP game that only had three people, all under legal age! I volunteered to play to fill a fourth and make things even. Mike and I always play competitively and hard. Some times we get carried away (mostly me) but in the end we have a good game and this was no different. The game was a fun adventure, Russians vs Germans. Basically each side has light tanks and there is a depot in the center of the board. The objective is to get to the depot and stay there for three "phases" w/o an enemy vehicle entering the depot. If you do this then you get a heavy tank. You can also get a heavy tank by killing four enemy tanks. The good news is that if your light tank is killed it immediately comes back in the game at the edge of the table. However if a heavy tank kills then your dead!! So there is a pretty good flow of light tanks in the beginning but when the heavy's arrive the end is near. The game went back and forth and in the last turn a Ba10 (operated by an excited 8 yr old) shot the side of my Tiger tank and brewed it up!! That was the game.

The evening Mike vol to re-run his Zombie game. So we all hung out and are having fun killing zombies. I'll post pictures and more later...

Check out the ODGW Gallery

Good Morning! Well it turned out to be a long night after all, (or short morning, as a Bob reminded me. Thanks Bob!) We started the Mein Zombie game (Name was determined last night) at around 9pm and finally was called at 1:30 am. Brother, there's a reason why I don't stay up that late and then return to the scene @ 8am! HA! We had a great time. Couple of notable happenings. One player (Guy Sr.) was in a house with a long bow and killing zombies off those of us who ventured outside, made a poor die roll and ran out of arrows. Later, Guy Sr. around 11:30pm has to leave (because he's running a game at 9am the next morning). The very next turn we find the arrows that would have benefited Guy Sr.!!! Oy. We had one hero (Bob B.) get swarmed and become a zombie himself! When a hero get "zombiefied" he gets to control other mindless flesh eaters. Additionally he becomes VERY difficult to kill! Tu's hero found a "survivor" woman who's screaming brought more nasties around. Tu being the gentleman was shepherding her to safety, suddenly turned "zombie" and tried to consummate their relationship"!! Tu politely declined her advances and promptley dispatched her. We all had a blast and I am looking forward to painting up some zombies of my own! 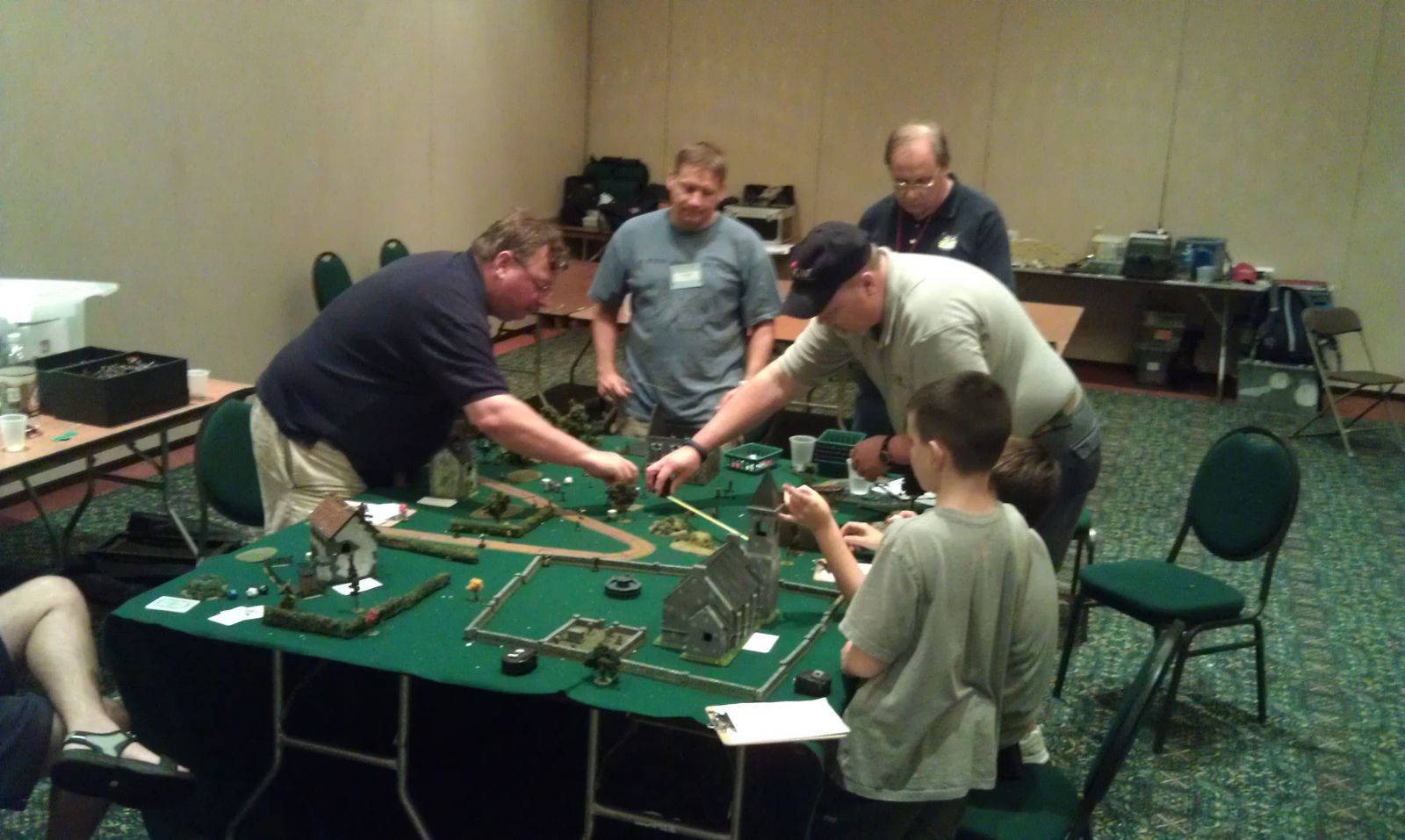 We'll I'm back a little early, had a couple fellows "ambush" me to grovel, humiliate, and beg to get in my game. (sorry guys least the names are protected.) HAHAHAHAHAHA! ... and now the true story, they did ambush me to inquire about openings in the game and of course I'll figure out something to get them in. It's truly humbling and nice to have folks want to play in a game that you have worked hard to put together. Looking forward to the game.

So fun story over, I'm back to posting pictures. Later...

I have finished posting pictures in our gallery. There is the main gallery with ODGW pics and 3 sub galleries with other stuff like the dealer hall, non-ODGW games, and Hobby University.

The afternoon games all ran with full complement of players. All in all we at ODGW had a full 4 days of players and only one game that was short of players but was ran any way.


Thanks for all the folks who came by to play and a BIG thanks to those Game Masters who ran our games! ...see you at Fall-In.