This is a hypothetical engagement between German and Red Army forces somewhere in northeastern Ukraine in late summer 1943.
I wanted to play an infantry-focused battle using the resources that would most likely be available to infantry units (on a good day). No Tigers or Panthers here. Rules are ‘Mein Panzer’. Counters are used to indicate hidden units or units in entrenched or dug-in positions.
Bad Day at Byednoe
The Soviets are driving towards the Dnepr in late summer of 1943. A German infantry regiment has retreated to a position behind the Myedlenaya River. The river is small, but its steep banks limit vehicle crossing to fords. A reinforced infantry platoon has been tasked with holding one of these fords at the small village of Byednoe. The platoon is to occupy the village. Four squads and one 81 mm mortar comprise the force in the village. A 75mm AT gun backs them up on the west side in a copse of trees, covering the ford. A 105 mm battery and its FO are available for final protective fires and a small reaction force (two squads and a Stug III) is on call if needed. The Germans hastily dig in and wait.
View from the German side of the field. 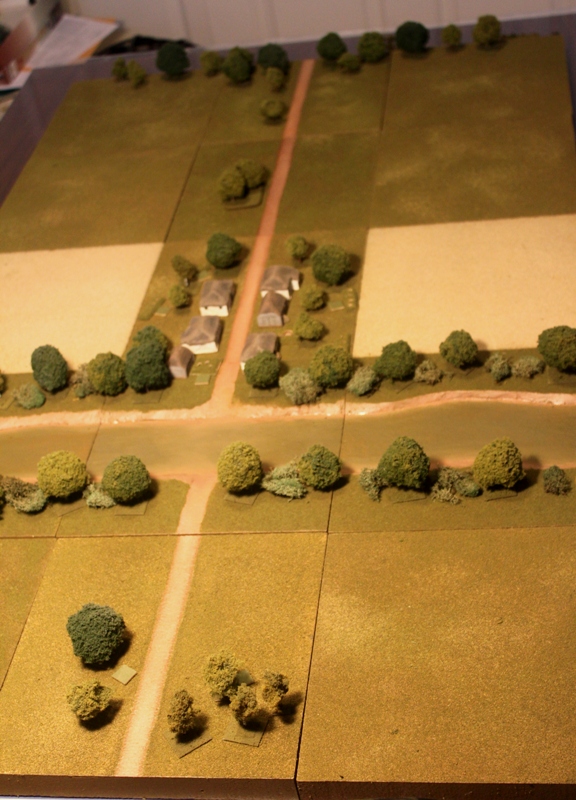 The Soviets close rapidly on the river as the day comes to an end. Regimental recon scouts the German positions during the night, locating the general trace of the German entrenchments. A soldier in the company tasked with taking Byednoe and the ford is from this village and informs the company commander that a ford shallow enough for men is not far north of Byednoe. Good to know.
The Soviet company commander is given support of a battery of three SU-76Ms and dedicated support of the regiment’s 120mm mortar battery (seven tubes). With these additional assets he makes his plans for the attack, scheduled for the morning. His attack will be one of several along the river line, so it is expected the Germans will be unable to respond with great strength against any single assault. Our Soviet commander’s plan is simple: the mortars will barrage and smoke the eastern side of the village; the SUs will advance up to the village to blast the Germans in their holes and the infantry will follow to make the assault. The attack will come down the road. 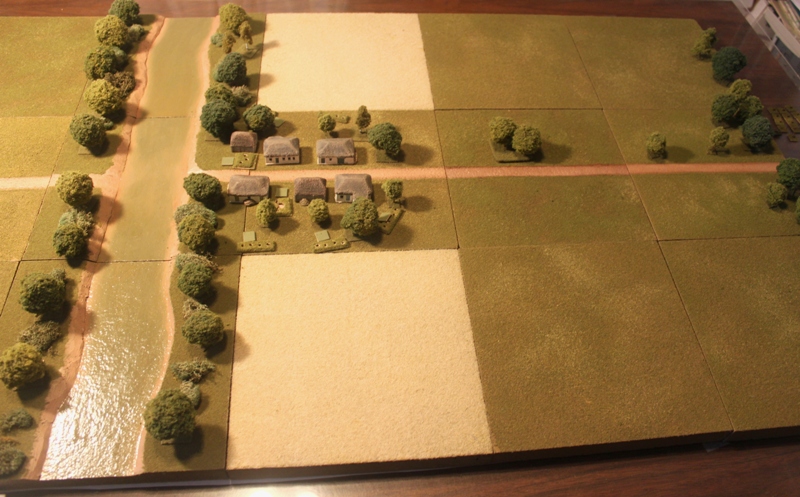 The attack begins. The 120mm barrage falls on the forward German positions. A lucky hit reduces one of German squads, otherwise no lasting effects. The SUs advance across the open, hoping the barrage suppresses any AT. 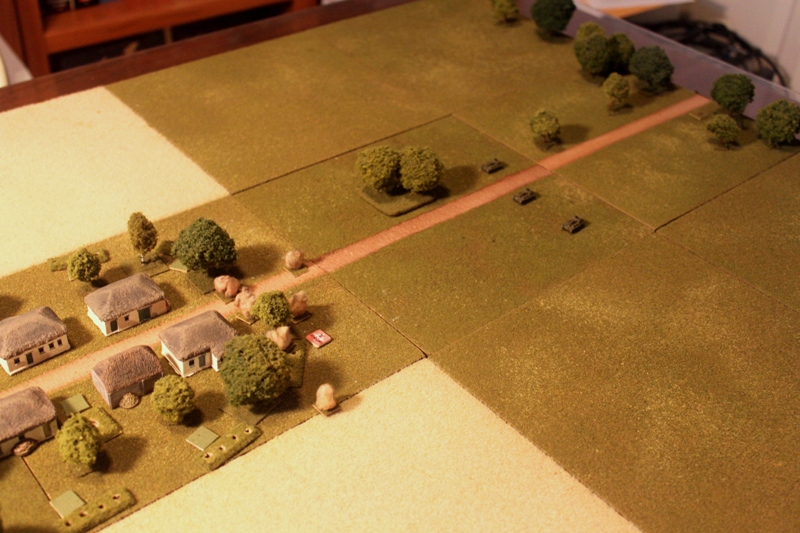 The Soviets adjust the barrage to the right, causing a slight pause as the tubes register the change. The German mortar fired at the SUs but missed. The Soviet infantry emerges from the trees. 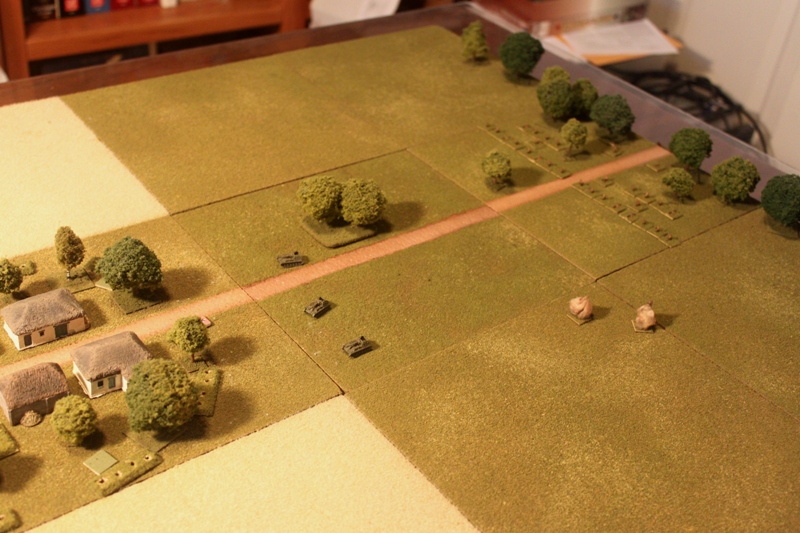 The Germans now engage the Soviet infantry with their MMGs and mortar, inflicting a hit on a squad and suppressing another. The Soviet 120mm mortars land another barrage on the Germans. 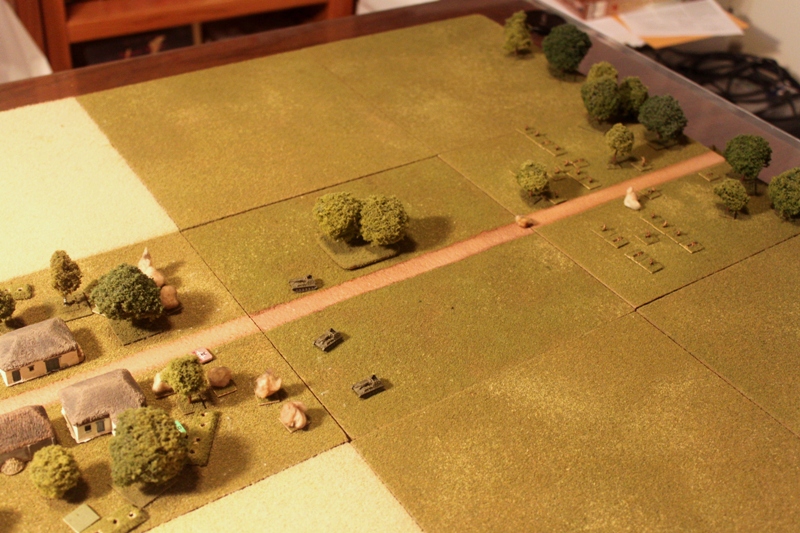 The German FO calls for final protective fires (FPF) from the 105mm battery, which land on the road in front of the village. The Soviets make another right adjustment to the 120mm mortars, suspending fire for a turn as the adjustment is made. The German MMGs and 81mm mortar continue to engage the advancing Soviet infantry. The SU’s fire on the forward German entrenchments and inflict casualties. The forward two squads are now eliminated and the FO is killed. 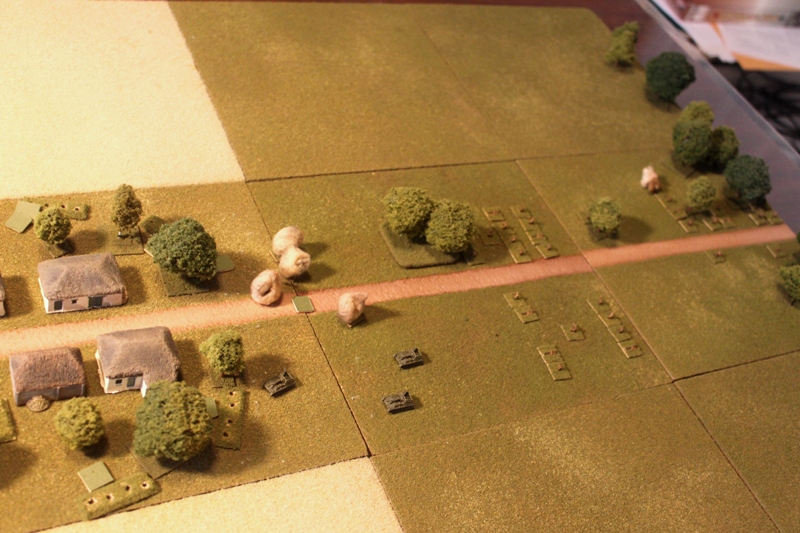 The Soviets now fire smoke as the German FPF continues on auto-pilot. Now disaster hits the Germans as they fail a morale roll and break, the remaining two squads, mortar, and platoon leader falling back to the rearmost entrenchments at the rear of the village. The German platoon leader calls for help, summoning the reaction force to come to his assistance. The Soviet infantry surges forward, flowing to either side of the German FPF barrage. 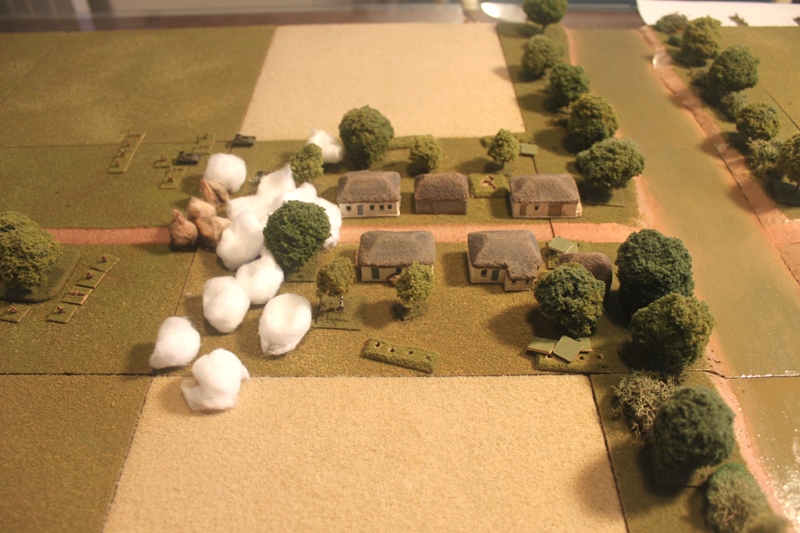 The Soviet 120mm mortars, after firing a second round of smoke, lifts its fires and shifts to land behind the village to block retreat and reinforcement. The German FPF continues. The Germans’ misfortune continues as the platoon fails to recover its morale. The Soviets sweep forward and assault and destroy one of the cowering German squads, losing half a squad in the process. The Soviet reserve platoon swings to its right toward the trees and the river, looking for the reported infantry ford. 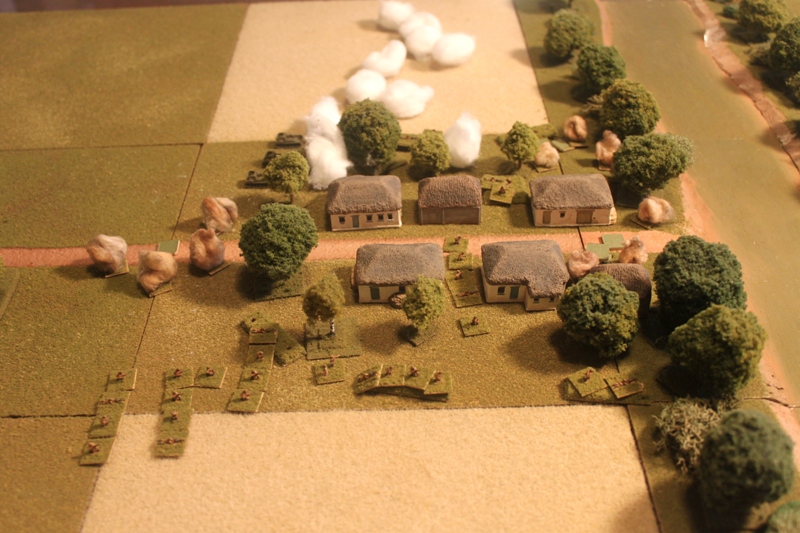 The German reaction force arrives, passing the concealed 75mm AT gun as it makes its way to the river crossing to block the vehicle ford. The Germans are unaware of the infantry ford upriver to their left. 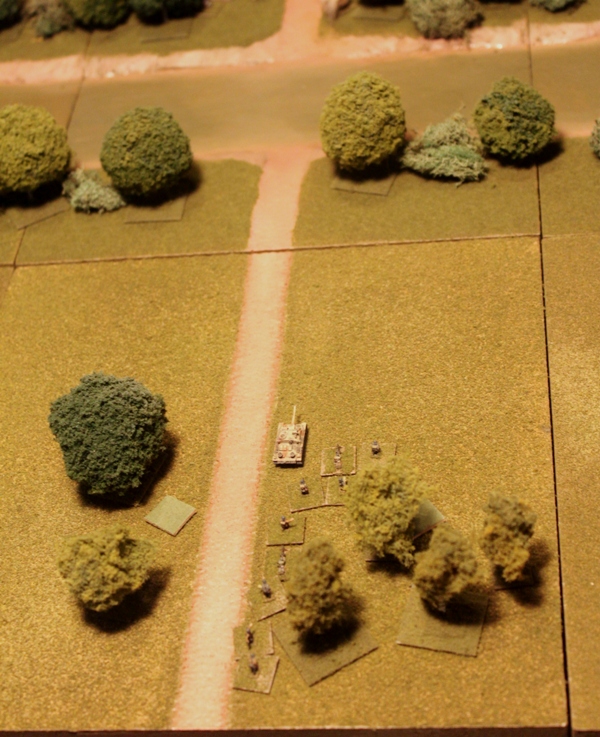 The German reaction force leader cancels the now useless FPF and calls for a new mission to block the approaches to the ford. The Soviet 120 mm barrage has been lifted to allow the Soviet infantry to close up on the river. The last German squad in the village is eliminated and the German survivors flee across the river. 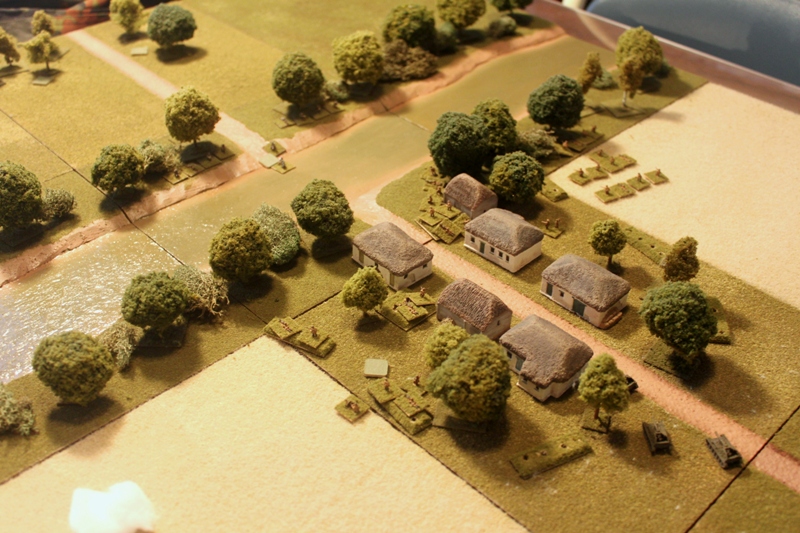 (Continued)
A fire fight begins across the river as the Germans defend the crossing from the advancing Soviet infantry. 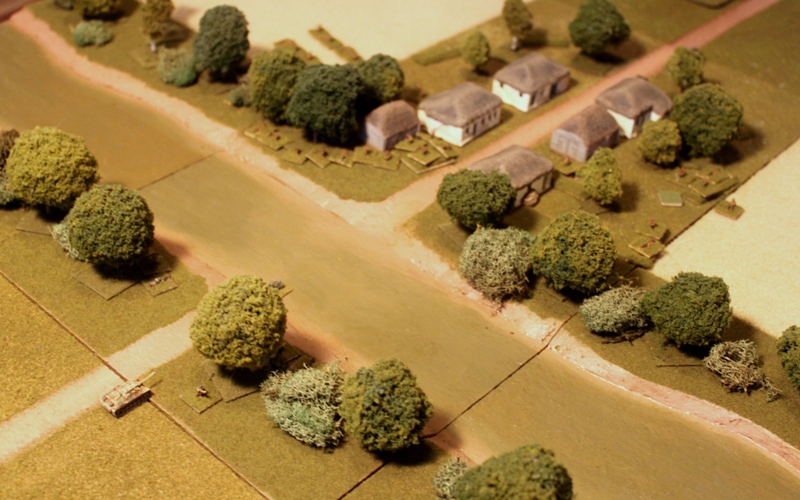 The Germans enjoy some success in this fight, inflicting casualties and forcing a Soviet infantry platoon break and fall back. 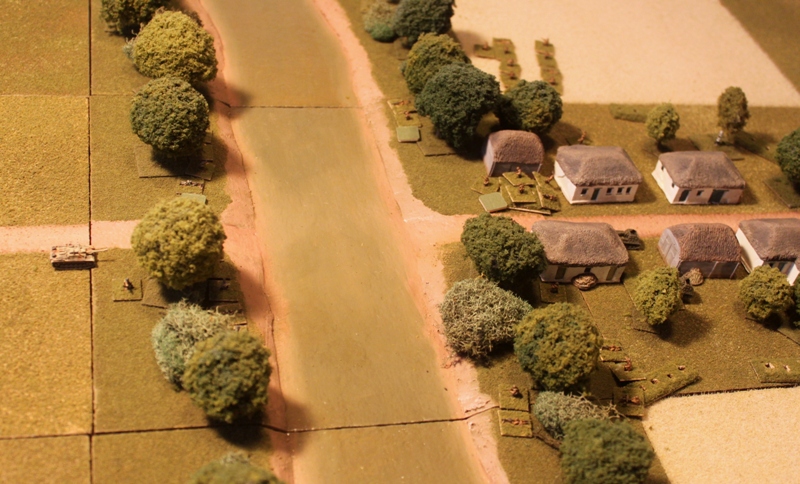 The German artillery barrage now arrives, turning the Soviet approaches to the ford into a kill zone. However, fire from a SU and the Soviet infantry reduce one of the German squads. Can the Germans hold? 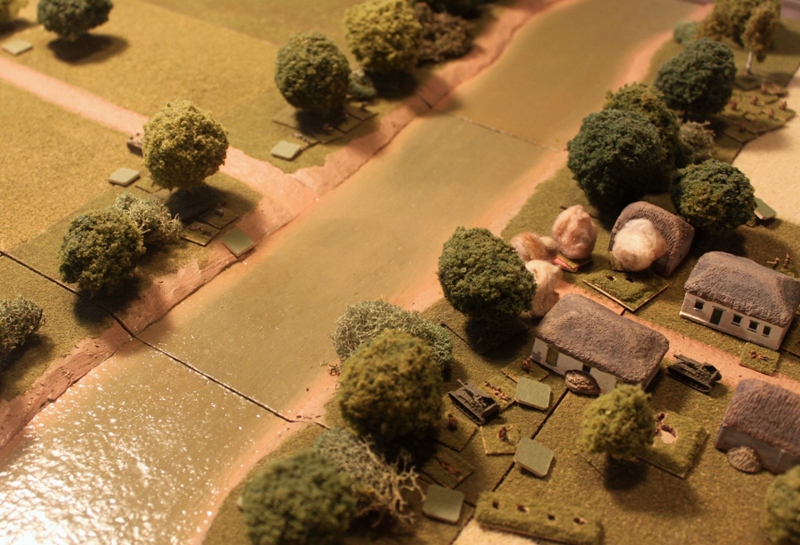 Meanwhile the Soviet reserve platoon has located the infantry ford upriver and has begun to cross while the Germans are engaged downriver. 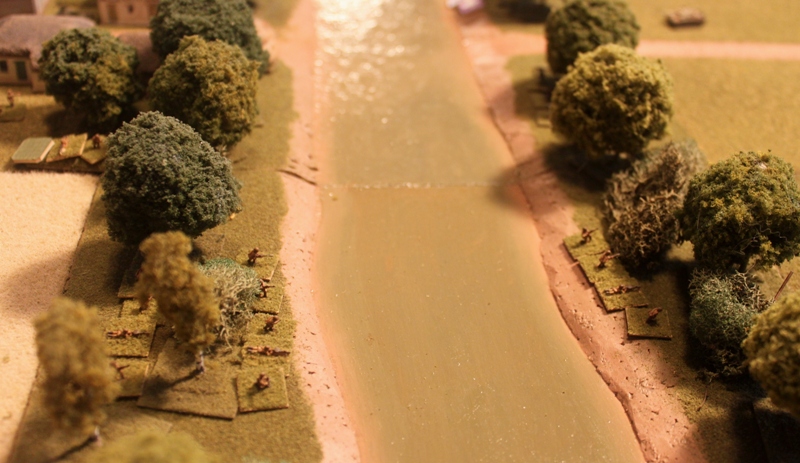 As the Soviet infantry makes its presence felt on the German left, the German commander decides that this day belongs to the Soviets and begins to pull out, heading for the next defensive position. Stalin’s army is now one more step closer to the Dnepr and Berlin. 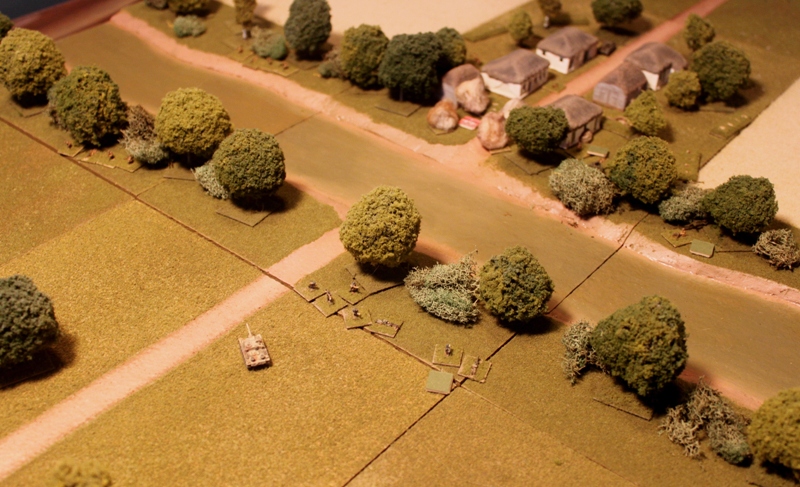 Great scenario and write-up, Begemot. I have become increasingly intrigued with the mechanics of infantry combat using this rule-set, and this seems a great example of what is possible.

The terrain concept looks similar to what we use here...12"x12" or 12"x24" geomorphic squares/rectangles, inventoried to accomodate various scenarios. If a new one is called for, no problem whipping them up. Some are 40+ years old now and still functional (with an occasional re-flocking).

Curious that you based your infantry singularly. Are you using a one-figure-equals-five, or some sort of scale representation?

The river looks brilliant by the way...

Pete and Healey - I'm glad you liked the AAR. Thanks for commenting.

Healey - The infantry rules in 'Mein Panzer' work fairly well. They aren't perfect. There is no distinction for the posture of infantry, prone vs. standing, but overall they fit well with the rest of the system. I think the intent of the never realized 'Mein Truppen' was supposed to provide a more detailed treatment. Too bad it never was realized.

I'm basing my figures for the most part singly because it gives me more freedom to show columns, staggered lines, and other formation irregularities that the normal group basing doesn't allow. I've also decided that single basing of infantry figures, where two such figures represent a squad, goes further in suggesting the 'empty battle field' of modern war. ODGW's suggestion of four figures on a 1/2" base for a squad for 6mm scale is just too crowded for my tastes. In this game I used four figures to represent a squad. Arrayed in a line abreast, at a game scale of 50 yards per inch, they have a frontage of 100 yards. A bit too big for a squad. Just personal preference.

Again, thanks for the interest. I've got a couple more AARs in the works to post here. Stay tuned.