Clash At The Crossroads


7 replies to this topic

Clash at the Crossroads

A “Mein Panzer” AAR for your consideration.

The scenario is a German drive to take a crossroad in the Soviet rear. The kampfgruppe has two Panther G platoons of 3 tanks each; a Mk IV platoon of 4 tanks; a mounted Panzer Grenadier company of two platoons (3 squads each); 2 HQ Panthers; and support by an off-map 105 battery. Trailing behind the kampfgruppe are three StuG IVs. Opposing is an adhoc Soviet force of: 1 three gun SU-76M battery; 1 T-34-76 company of 7 tanks; 2 Zis-3 AT guns with Studebaker prime movers; an infantry company of 2 platoons with 2 squads each; a battery of 76mm artillery in support (maybe); an IL-2 sortie; and a depleted T-34/85 company as reinforcements on the way. The troops for both sides were rated as regulars.

This is an overview of the terrain. The Germans will enter from the top of the photo, 6 inches either side of the road. The Soviets will defend the crossroads and its approaches. 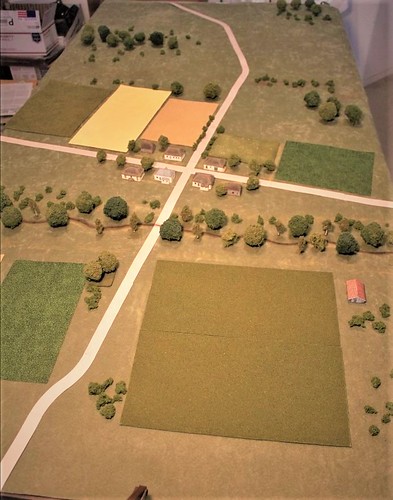 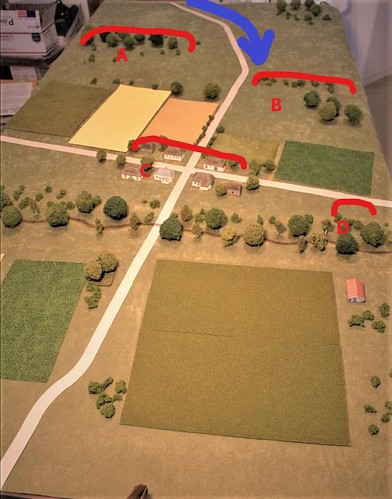 The Germans cautiously advancing along the road. They've already engaged the SU-76 battery which was in the woods to their right front. The Soviets lost 1 SU-76 with the surviving 2 withdrawing deeper into the woods to escape the fire power of the Panthers. The picture shows the first pass of the Il-2. It made a rocket attack on one of the Panthers, but missed. 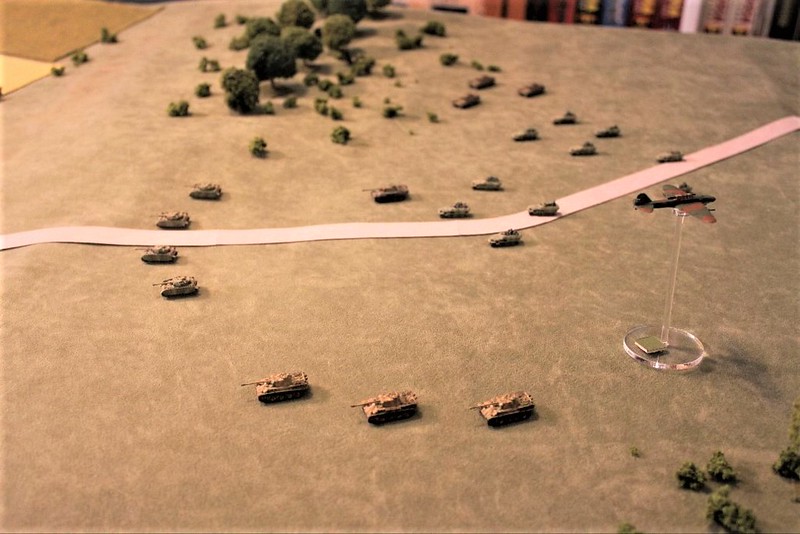 The German tank line cautiously approaches the Soviet concealed T-34 company in the brushy low ground. The Soviets need to get close and try for flank shots to take out the Panthers, hence they are trying for an ambush. 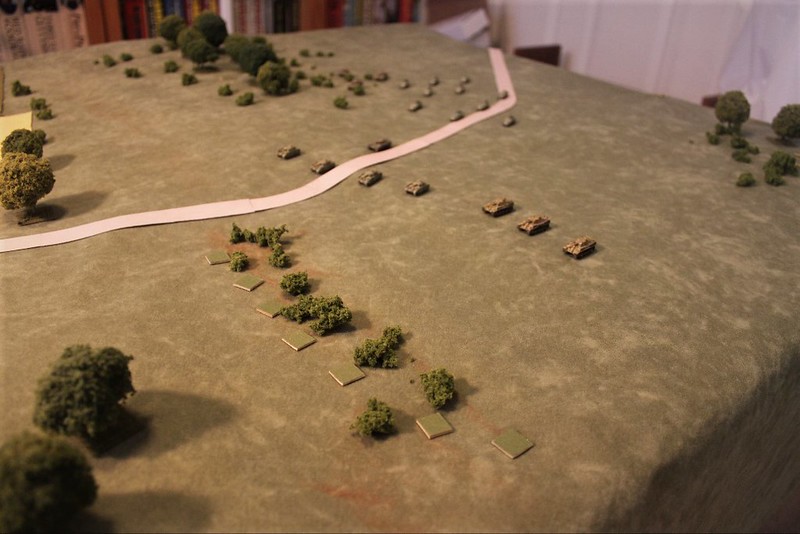 The Panthers spotted a T-34, engaged it, but only immobilized it (back luck on the To-Kill rolls). The Soviets then charged forward and managed to enjoy good To-Hit and To-Kill rolls, killing 2 Panthers and 1 Mk IV, the kills generating brew-ups. 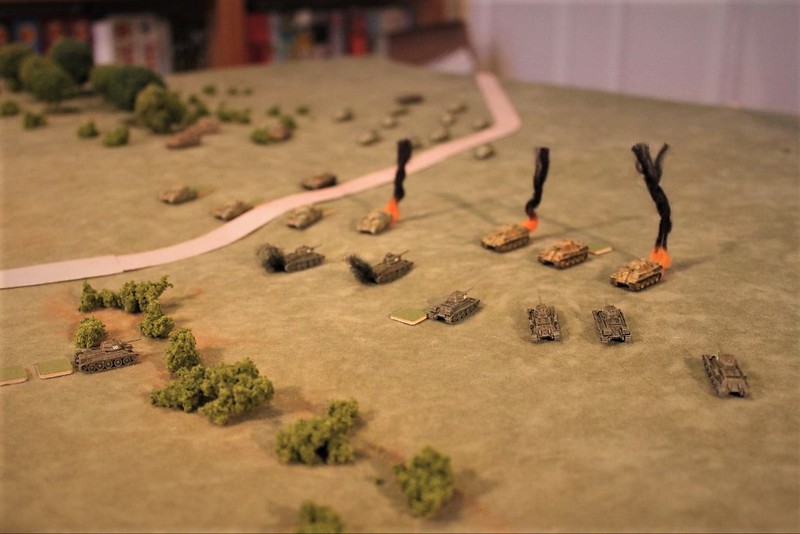 The end of turn 8. The surviving T-34s moved out to try to kill the surviving Panther and to try to get at the Panzer Grenadiers in their transports. It is not to be. The Germans respond by bringing over their right flank Panther platoon who deal with the Soviet T-34s. Unfortunately for the Germans, the Mk IV platoon fails its morale check due to their loss of a tank and Break. The IL-2 returns to the map, makes another rocket attack on a Panther and gets a kill. By now the Germans have lost 5 of their 12 tanks. The Soviets have lost 1 SU-76 and 5 of 7 T-34/76s. 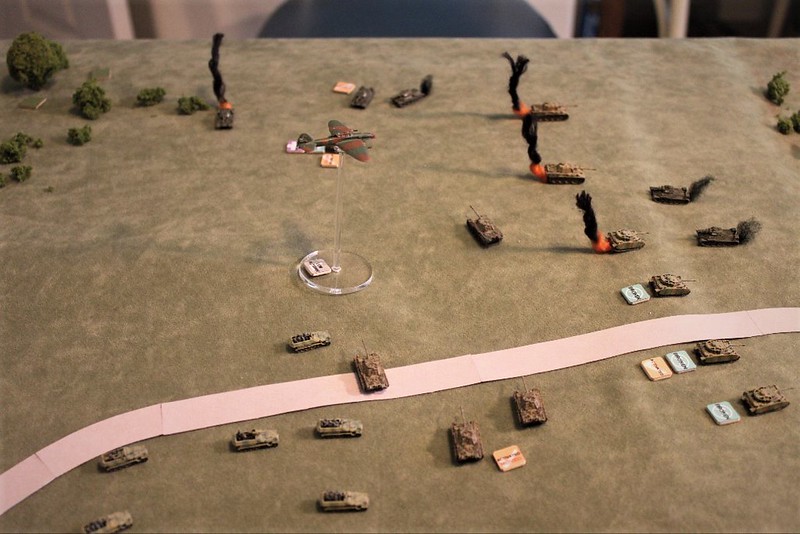 The reinforcing T-34-85 company arriving on the map on turn 10. I had it set so that on turn 8 the Soviets would begin to roll for their arrival, needing a 1-2 on a D6 to bring them on. Once they got the arrival roll the Soviet then rolled to see how many of the 10 tanks in the company actually made it. Each vehicle was rolled for with a 1-2 of a D6 taking them out of the arrival. 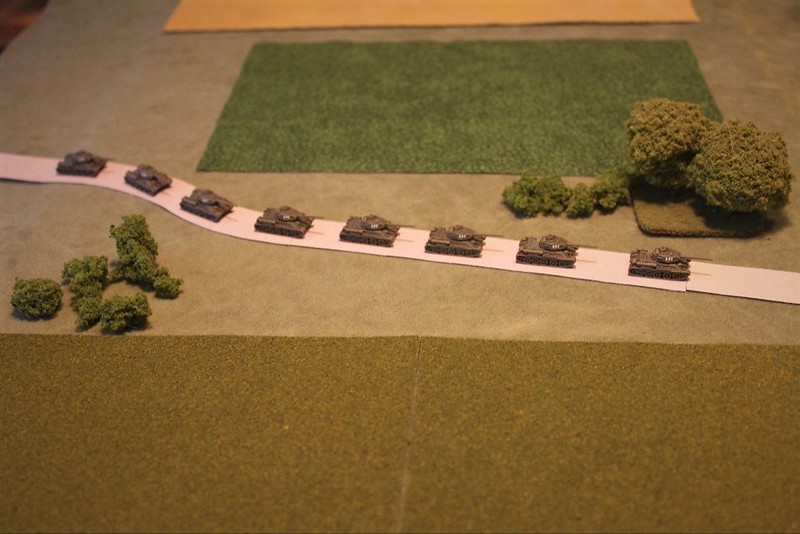 The T-34-85s deploy to the left of the village. They are attempting to dominate the open ground in front of the village, ground over which the Germans must cross. 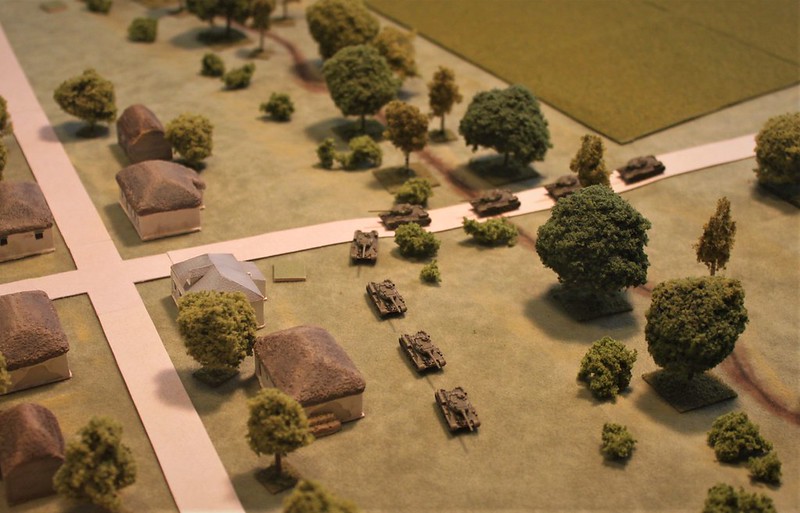 The Germans recover their temporarily retreated Mk IV platoon and begin to move towards their objective. The Sturmovik returns and lines up to attack the German tanks again, but AA fire from the German halftrack mounted machineguns downs the Soviet plane which falls onto the battlefield. 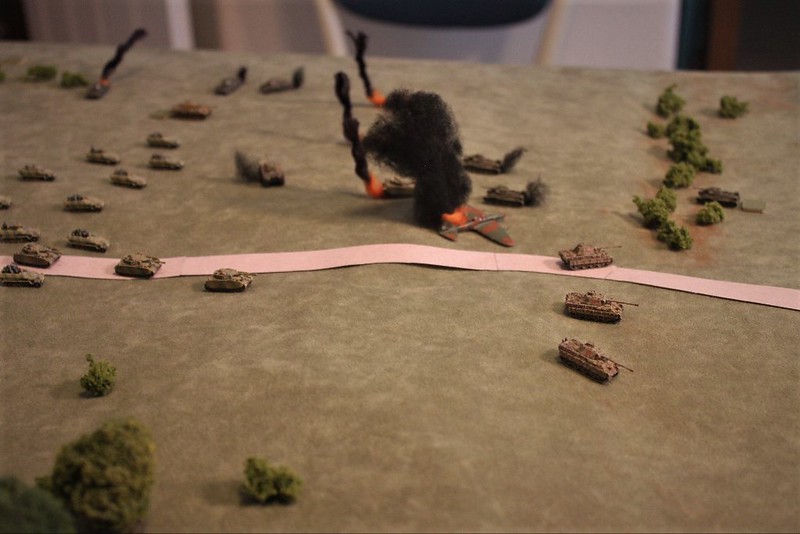 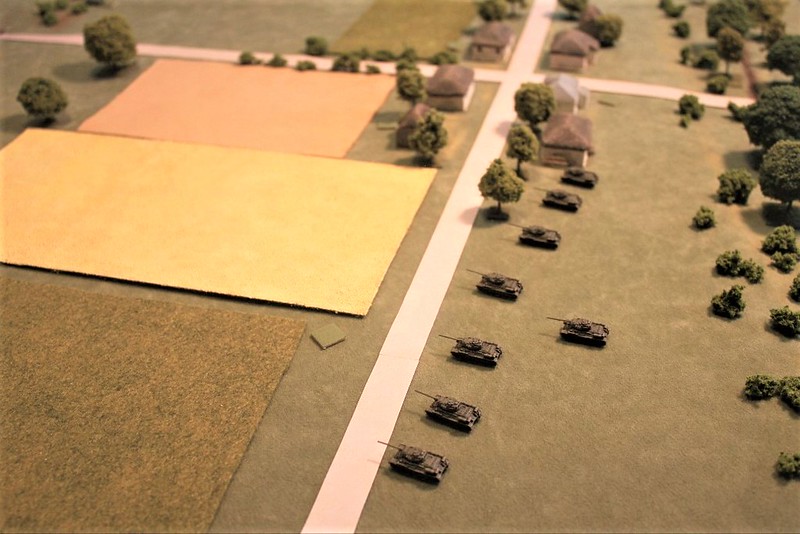 One of the SU-76 emerges from the woods and nails a Panther (lower left). A Mk IV will be tasked to deal with this threat. 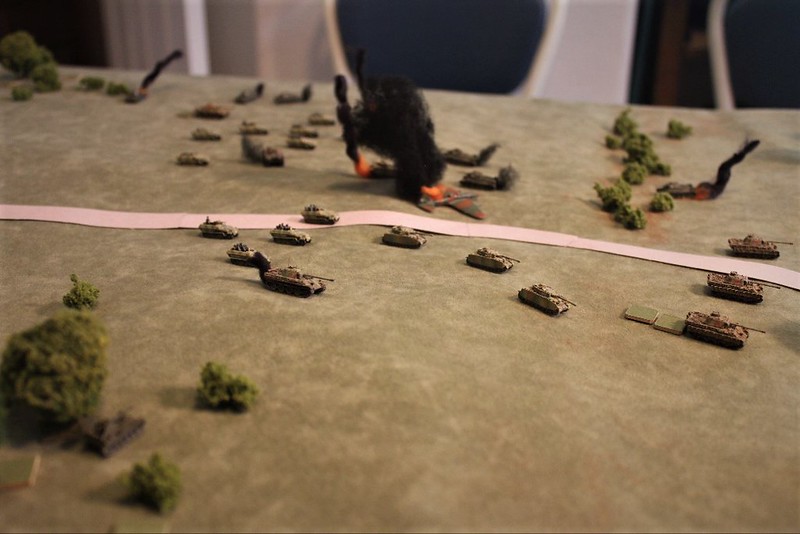 The trailing StuG IVs make their appearance on the board. They will join the battle line but will have no effect on this engagement. 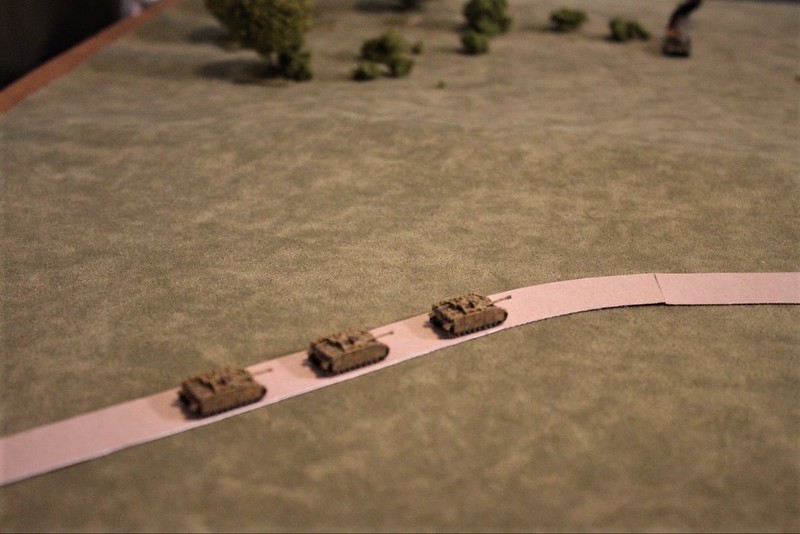 The German directs his Panzer Grenadiers into the low ground from which the T-34s had lain in ambush. This defilade will mask the infantry’s dismount for their assault against the village. 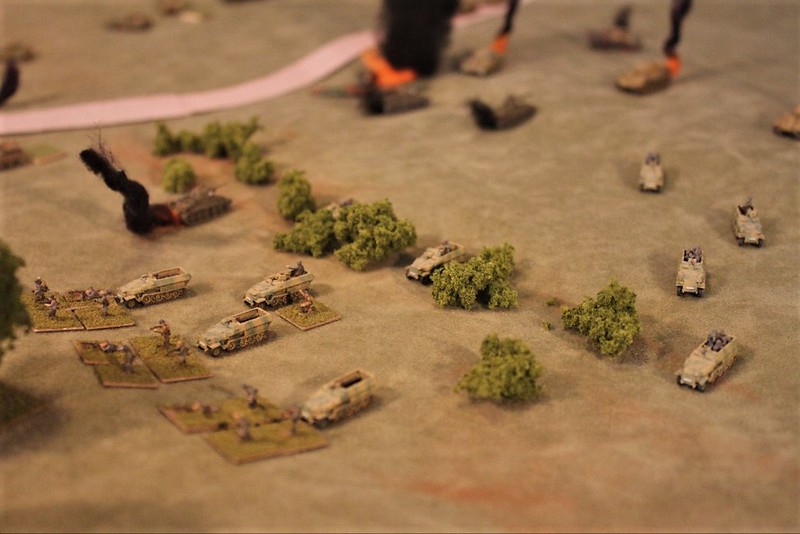 The Soviet T-34-85 line has been trading fire with the German tanks in the center and both sides suffer losses, the Soviets tanks suffering kills, the Germans losing a Panther as a kill and two Panthers and a Mk IV as mobility losses. 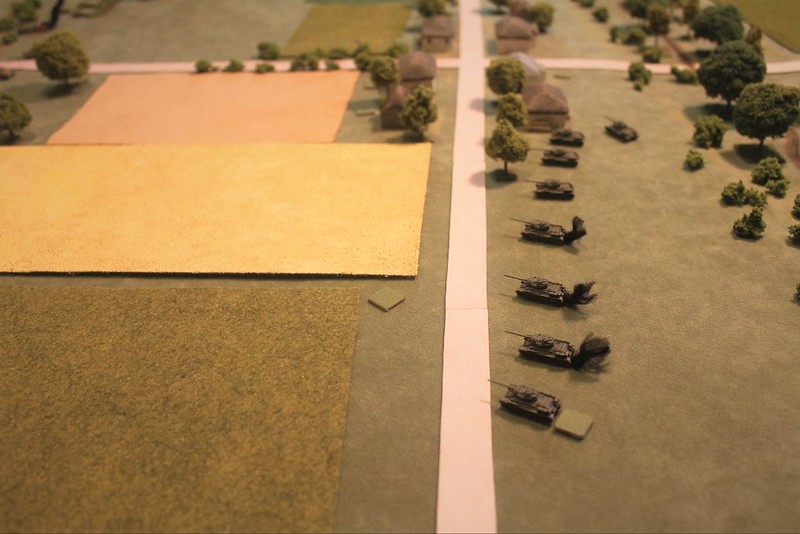 The German center, with the Stug IV battery trundling up to the battle line. The surviving T34-85s collect behind the village, shielding themselves from the German tank fire and to provide close support to their infantry against the coming German infantry attack. 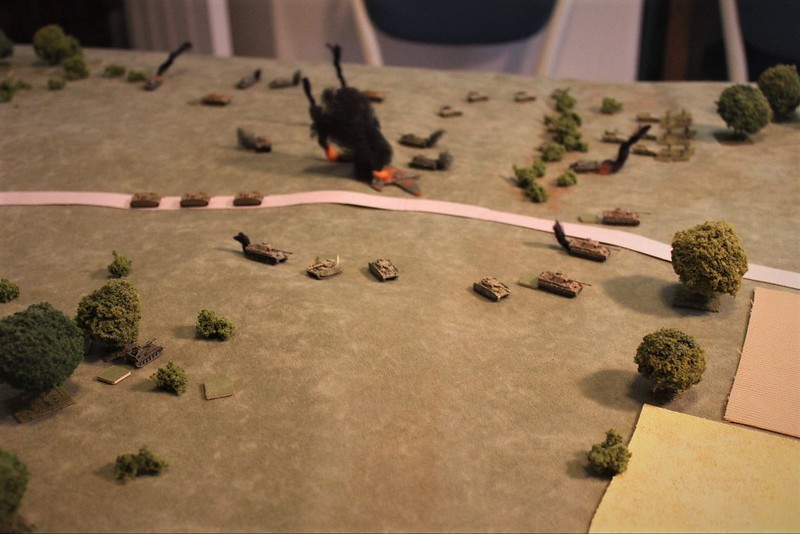 The trailing Panzer Grenadiers dismount, their comrades having already moved into the woods heading for the village. 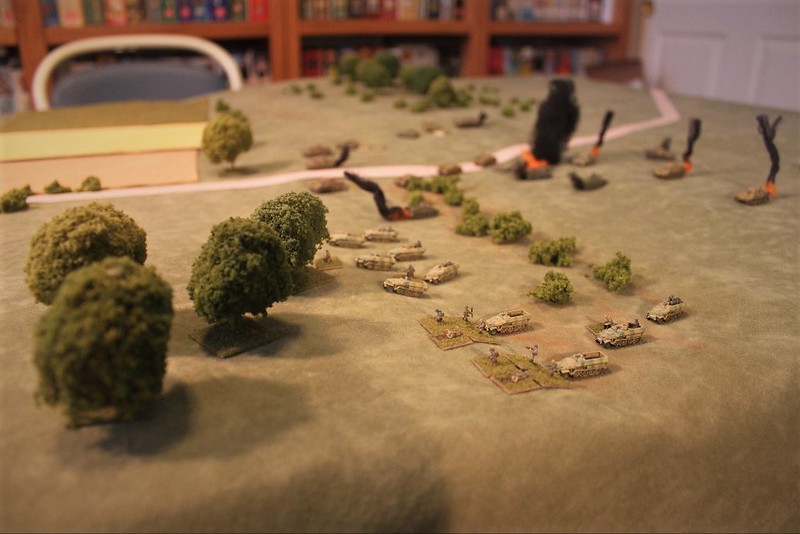 The German artillery begins to fall on the suspected Soviet infantry positions and the leading Grenadier platoon breaks from the trees into the open, their comrades moving up to their left. 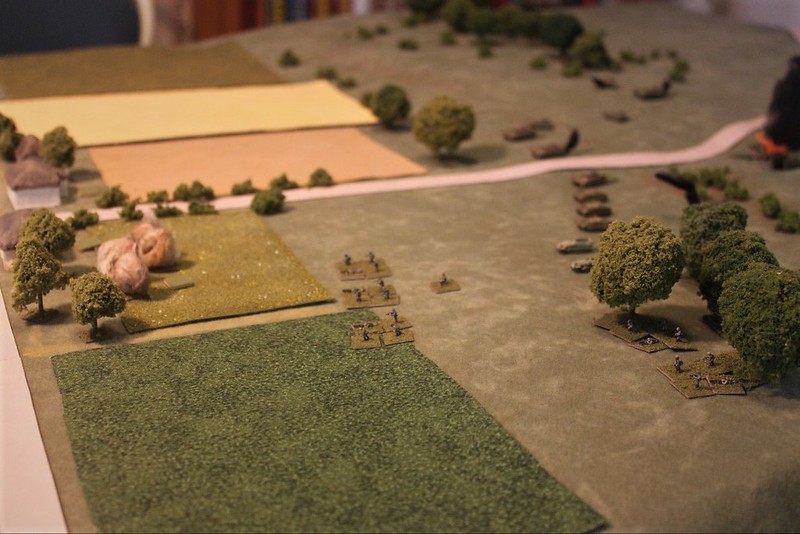 Meanwhile, on the German left another SU-76 emerges from the trees and takes on a wary Mk IV. The exchange goes to the Soviet. The SUs from this point remain cautious, not wanting to press their luck in the open, so they stay in the trees waiting for a good shot at low risk, should the opportunity present itself. 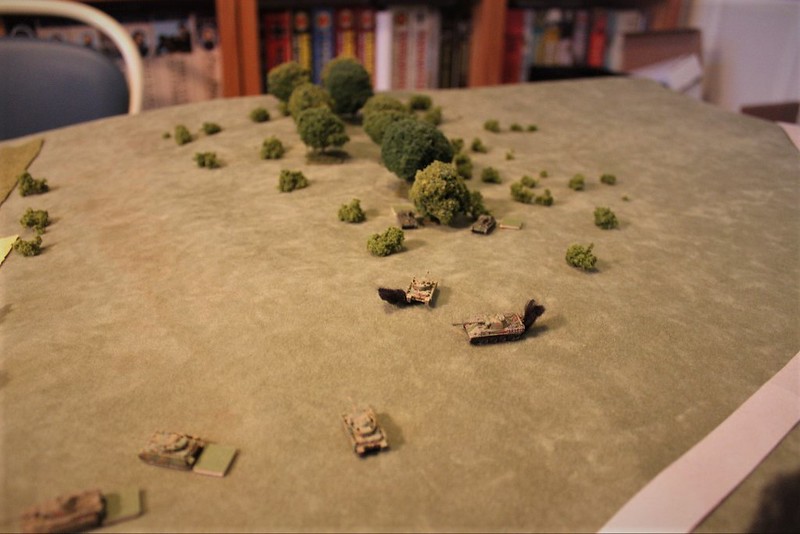 The German infantry closes on the village while the German artillery pins the Soviet infantry in their foxholes. 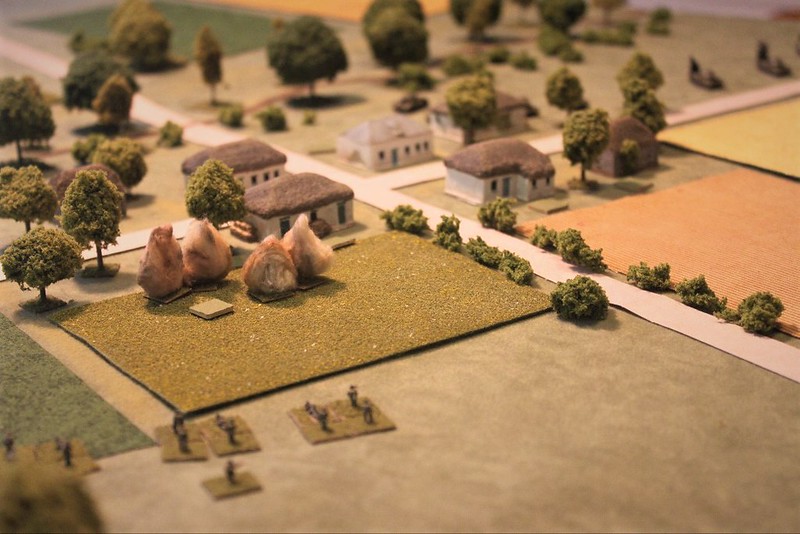 Now the Soviet artillery appears and catches the Germans in the open. 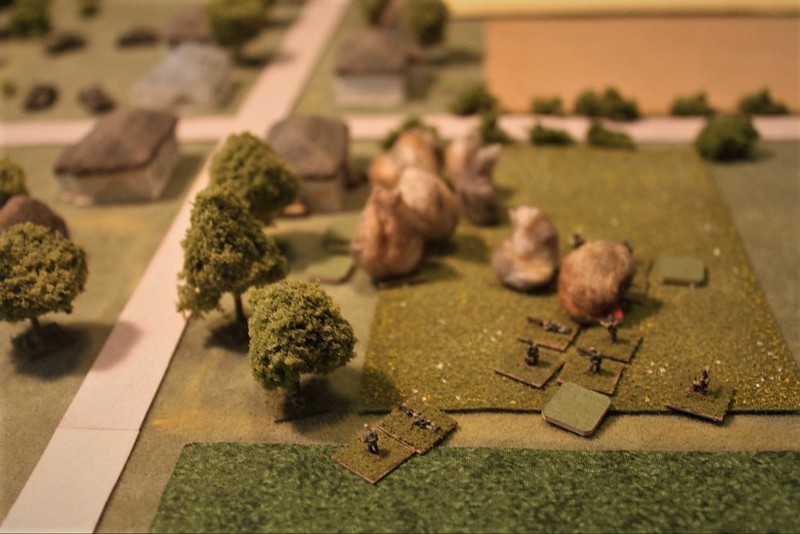 The Soviet Zis now open up on the advancing German infantry. These guns, dug in, are masked from the German tanks, so the infantry is on its own against them. 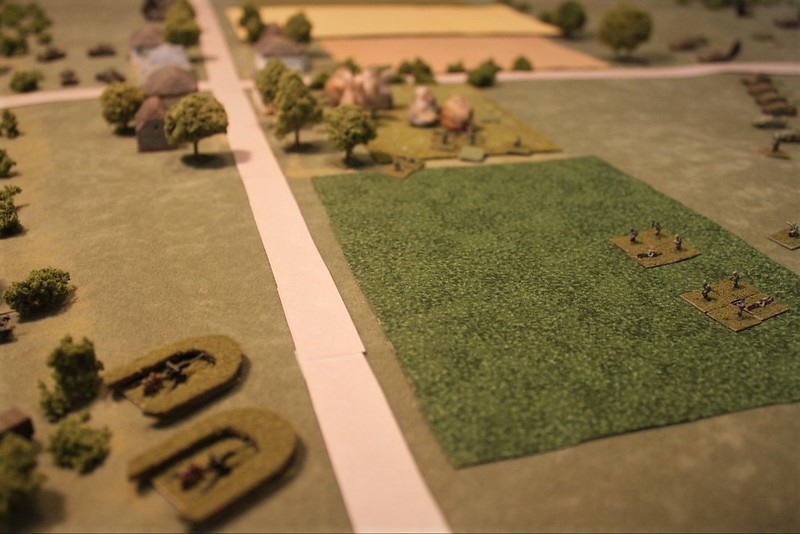 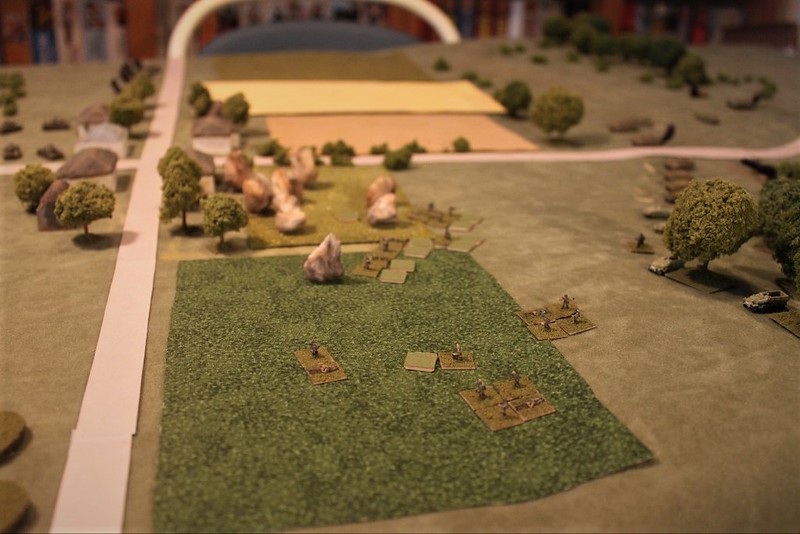 The moment when the Germans called off the assault. The German artillery still falls, but now to cover the withdrawl. The Soviets hold the crossroads, thus gaining the win. 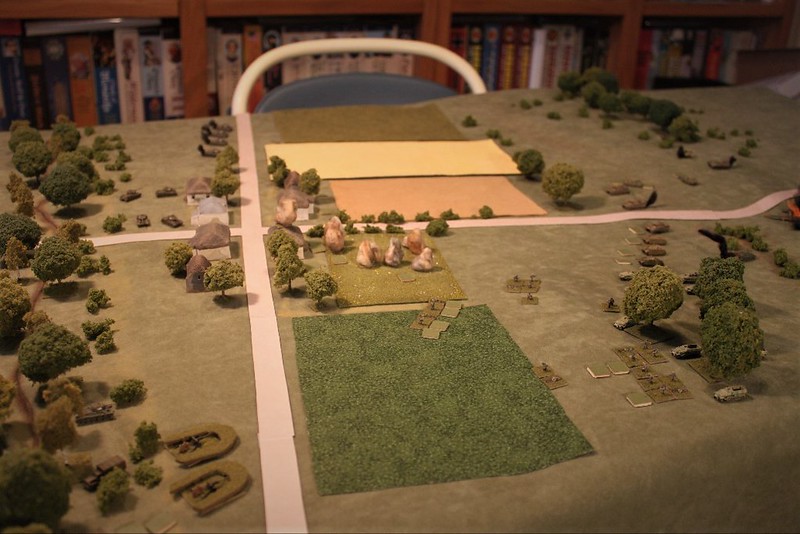 Another nice AAR recapping another interesting scenario. Panther G deployment would suggest an action of mid-1944 or later, certainly at or near the beginning of the Germans' great unraveling in the east...a local counter-attack, perhaps. It looks like great fun. It's especially nice when the game-host takes the time to prepare some brilliant terrain, as you have done here.

I marvel at the Germans' ability to get their mech infantry across the table intact...I'd have lost half of them before I could get them into position.

That is another great AAR, Begemot, with pictures of your wonderful terrain and minis.  It is another interesting situation for both sides.

Where'd you get your mat? Homemade, commercially manufactured, or something from the fabric store? A nice subtle base color.

Healy36 - It is material from a fabric store. Something appropriate for furniture, like a covering a sofa. It is a grayish sage green color, and I got it because, as you noted, it's a subtle base color. I've been very pleased with it.

Yes, it's very nice. Has me thinking I should look for something similar. I've used big sections of felt in the past, but it's tough to run down anything in a mottled green-gray color (like impossible). Sounds like I need to find a store with a wider selection of material and simultaneously expand what I'm looking for. Thanks for the info.