The Pain Off Spain

The Pain Off Spain

Vice Admiral Gravina, a scion of a Spanish naval family going back to the Age of Sail peered into the gloom ahead. It was very dark with both a new moon and an overcast sky, but there were no squalls and the sea state was fairly calm. His fleet or Franco’s depending on your view point was steaming due east to try and intercept an Allied fleet escorting an invasion convoy against Majorca.

Franco had not gotten his guarantees of French Morocco and portions of Algeria from Herr Hitler, but had decided to declare war anyway. The abortive assault on Gibraltar had brought consequences. The Royal Navy had already taken the Canary Islands and now another Allied Fleet had designs on the Balearics. His intel said the Koninklijke Marine formed the escort. His ancestors had fought the Dutch and now he would also.

The Armada Espanola was deployed in three squadron columns, DesRon 1, the cruiser squadron and DesRon 2 (from port to starboard). With only 3,000 yards between columns the formation was a bit tighter then Gravina would have liked but he was concerned about fratricide if contact was established before daylight. Gravina expected contact to starboard but his experiences at night against the Republicans told him that anything could happen.

At 0442 hours DesRon 2 opened fire at unidentified destroyers to their starboard rear. Gravina rapidly realized that he had overestimated his opponent’s speed, causing him to over shoot his quarry and ordered his fleet to reverse course. He also realized that sea haze that had been drifting in from the north had concealed his fleet from the enemy’s lookouts. He would get his fleet turned round and light off some star shell to illuminate what the heck was going on.

DesDiv 4 had been trailing DesDiv 3 in the southern most column of the fleet. Miranda, Escano and Ciscar had all detected a destroyer at 2,000 yards at 0439 hours. By the time they opened fire at 0442 hours at least two more destroyers had come into view on a course of 030 degrees. Miranda’s fire was ineffective (OK, she missed), but Escano hit the leading destroyer five times and Ciscar hit her twice. Ciscar hit the aft of her target and immediately set her on fire while Escano seemed to concentrate on the fore of the ship and her forward gun mounts were seen to fly into the air. The targeted destroyer (later determined to be Banckert) seemed to settle a bit and what had been thought to be an over from Ciscar struck her DCT and lit it up.

But DesDiv 4 had also launched all their torpedoes (6 triple mounts) at the offending destroyer. Two fish (one each) from Escano and Ciscar struck the destroyer sinking her outright. One of Miranda’s torps hit the destroyer behind sinking her (Van Ghent) also. But the torps were not done yet as two of Miranda’s and one of Escano’s hit yet a third destroyer (Van Nes) sinking her also.

The last destroyer in the targeted column now fired back and struck Ciscar four times, setting her afire, damaging a bulkhead, her engines and knocking out her aft gun mount. The return fire from DesDiv 4 was devastating. Miranda hit her (Van Ghalen) thrice, Escano twice and Ciscar five times. The destroyer went DIW and sunk three minutes later.

Gravina ordered DesDiv 4 to make smoke, break contact and continue east until daylight before rejoining the fight. But that took a few minutes and, in that time, the enemy cruisers hit Miranda eight times and Ciscar seven times. Miranda took two hits in her bridge, was set afire, lost a TT mount, hull damage, damage to two bulkheads and her aft gun mount. Ciscar lost all her TT mounts, both her aft gun mounts and one fore gun mount and hull damage. Miranda would sink about 9 minutes later

But Gravina’s cruisers had now turned around and could see the Dutch cruisers. Rear Admiral Valdes’ light cruisers fired off their port torpedoes (all 6 triple mounts). They would reverse course and give the Dutch their starboard side next. Gravina ruefully thought about his heavy cruisers empty fixed tubes and opened fire on the lead Dutch cruisers instead.

The remainder of DesRon 2 (SL & DesDiv 3) now got into the act, firing their torps at the Dutch cruisers. Each destroyer targeted a cruiser. Each cruiser acquired at least one spread of torpedoes and tried to evade. Zeven de Provincien and Tromp still each took a hit. Zeven de Provincien sank and Tromp was badly damaged and set on fire. Endratch hit Canarais once, but De Ruyter hit Baleares five times. Canarias took damage to her engines. Baleares was set on fire, lost an empty TT mount, hull damage and both her fore turrets.

The Spanish light cruisers having turned around now fired their remaining starboard torpedoes (another 6 triple mounts) at the remaining Dutch cruisers. The Dutch tried to evade and succeeded with the three spreads that would have missed anyway. But each Dutch cruiser took a hit apiece from the remaining spreads. Endratch, De Ruyter and Tromp all sank.

At this point Rear Admiral Staveren withdrew with the convoy, his cruiser and DesGrp 2 and Majorca, well that would stay Spanish for now.

As dawn broke the Armada Espanola returned to base, elated at having beat the Dutch so soundly. But Admiral Gavina knew that it was the sea haze that had given him victory.

Night action = Two groups of men armed with sawed-off shotguns tiptoeing around a blackened room waiting for somebody to sneeze.  For all practical purposes (thanks to the sea haze), the Dutch sneezed.

I could not have put it better. The Dutch almost made it to daylight without contact when their better gunnery would have made a great difference. The Spanish at 25 knots, crossing the Dutch Tee at 14 knots almost over shot their mark. All the torpedoes were launched in their first range band against targets that could not see the ships trying to torpedo them. The Spanish had 40 triple mounts with torpedoes in them (The Canarias class carried empty fixed tubes until Canarias' rebuild in the 50s) and fired them all with a hit range of 1-6. They rated to get at least 20 hits and the Dutch were dead if that happened.

A fun dust-up for sure. What's the timeframe for the scenario? Mid-war? Early postwar?

The De Zeven Provinciën-class light cruisers were lovely ships, and if memory serves, the last cruisers built by the Dutch for the period (languishing incomplete following the fall of the Low Countries). Postwar mods had them in service until the 1960s: 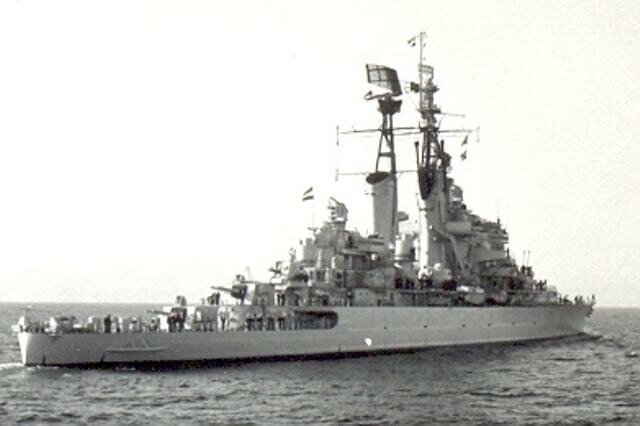 Not sure of the date of this photo of De Zeven Provinciën, but clearly before the removal of her aft batteries for a hangar and 'copter pad.

I put it in the late summer of 1940, before the Japanese occupy French Indochina. Franco made an abortive attempt to take Gibraltar (as Hitler wanted) shortly after France fell; but made it an all Spanish effort and failed (as Hitler feared). Churchill decided to punish Franco by taking his off shore territories from him; the Canary and Balearic Islands. The Canary Islands was an all Brit affair and went off smoothly. The attempt at Balearics had the Brits providing the troops and transports while the Dutch provided the naval support. If my sources are right then Churchill kept a brigade on stand by for just such an occurrence until it became apparent that Franco was not going to act under the conditions Hitler was willing to give him.

Had the encounter occurred during daylight then I'm sure the Dutch (who shoot much better) would have given a good account of themselves. But it happened at night. Both sides rolled poorly for acquisition (each rolled 7). But it was the sea haze that really blinded the Dutch and made it a torpedo ambush which was the best chance the Armada Espanola had. It was a good dice day for the Dons and a not particularly good one for the Dutch.

Taking hold of Spain's Atlantic island holdings would prove fortuitous for the Allies in the oncoming U-boat war. I seem to recall Churchill floating an invasion of Portugal at various times during the war, once as France collapsed and again years later as an alternative to plans for Normandy (this being one of the times Alanbrooke stood up to him and called him out for his occasional foolishness). There was a lot of "goings-ons" in that Land's End-to-Gibraltar theater that could be of interest.

Any scenario attempting to take a look at Franco's navy is brilliant, as far as I'm concerned.

Thank you. However, I just wanted to match the Dutch up against someone other than the Japanese and that is not as easy as it sounds if you try to have any possible historical probability. I don't think this was as much a stretch as the Long Way to Pararimbo was.

It appears to me that the Dutch with their lack of cruiser torpedoes are at a disadvantage at close range versus anyone whose cruisers have them (like the Argentines or the Spanish). Now the Dutch gunnery can make up for that but without rapid fire they need stand off to give their gunnery time to inflict the damage they need to win. A night engagement obviously detracts from that. But I roll these engagements out using the engagement set up table from DTMB and you get what you get.

As for Franco going to war with the Allies. He really wanted to in the summer of 40, but he wanted Hitler's guarantee that he could take French Morocco and some of Algeria (how much is open to question). Of course the French were not likely to be alright with that. In any case it was moot as Hitler had the French where he wanted them at that moment and he did not want Franco up setting his cart.

As far Gibraltar goes. Franco wanted to take it, but he wanted an all Spanish effort without any Germans. Hitler feared that Franco would fail and wanted him to let the Germans in to do it right. Franco would not go for that and that is where it ended. But the Allies knew what Franco had wanted and held it against Spain (not a surprise). In fact Spain was fairly isolated politically until Franco's death. Oh the tangled web we weave.