5 replies to this topic

It is a gloomy morning in January 1915 and once again a German force consisting of the battlecruisers Seydlitz, Moltke, Derfflinger, and Blucher have succeeded in bombarding a port city on the British East coast.  With several groups of British ships looking to intercept their escape run back across the North Sea, heavy weather has resulted in reduced visibility of only 12,000 yards. It looks like the Germans are going to escape but then their luck runs out when they are suddenly confronted by a formation of British ships emerging from the gloom, and already at close renege!   They have managed to bump into a squadron of eight obsolete British pre-dreadnought battleships of the King Edward VII class. These ships are affectionately known in the Royal Navy as the "Wobbly Eight."

The Wobbly Eight don't have much of a chance but their 12 inch guns are enough to inflict serious damage on the German battlecruisers. The Germans are in a battle column while the British are in a long line abreast to facilitate their search for the Germans.  The German ships turn North in an effort to maneuver around the British ships.  This almost succeeds, but it does take them a bit closer to a strong force of British battlecruisers who are nearby and closing rapidly from the North.   Both sides open fire at around 10,000 yards.  The Germans guns score hits on the Wobbly Eight, who also manage to get a couple of good hits on the Germans.

The German turn to the North takes them very close to the British Division consisting of King Edward VII, Hibernia Hindustan, and Zealandia.  Three of these British ships eventually succumbed to the German fire, but the British ships, who had been concentrating their fire on the Blucher, managed to cause enough damage to slow her to only 11 knots.

The German attempt to get around the Wobbly Eight by side stepping to the North is blocked by the squadron of four British armored cruisers consisting of the Hampshire, Argyll, Devonshire, and Roxburgh.  This event, plus the sudden arrival of the British battlecruiser force from the Northwest, forces the Germans to turn Southeast, putting them in close range of the second squadron of British pre-dreadnoughts consisting of the Africa, Britannia, Commonwealth, and Dominion.   In this exchange, the Dominion was lost but Seydlitz took enough damage to slow her to only 18 knots.

The game was wrapped up at this point.  The Germans would of course claim victory when they returned to port, pointing out that they had sunk four British "battleships" even though the loss of those ships would have no real impact on the further conduct of the war.  On the other hand the German battlecruisers Seydlitz and Blucher, had been roughly handled and they slowed to the point where it was unlikely that they would make it home.  This would of course discourage any further German attempts to send the battlecruiser squadron to bombard the English coast.  So, in the end, the Wobbly Eight succeeded in accomplishing what they needed to do.

Nice; it's always fun to get a few of the more obscure fleet units into the scrum.

Manage to get any photos of the action?

Pictures of the Wobbly Eight 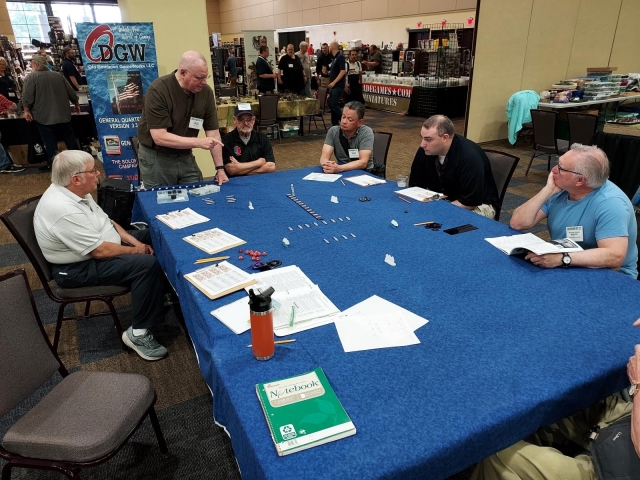 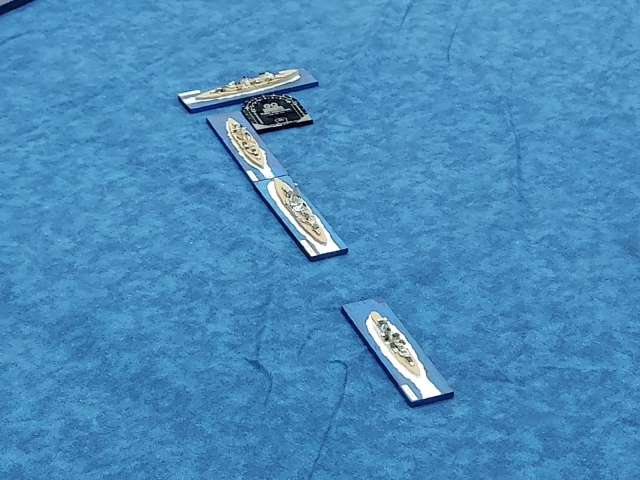 It looks interesting.  I admit that I have a soft spot for WWI naval action and will do Coronel and maybe Falklands one of these days.  Of course I need to paint some more ships first.

Thanks for the pics; it looks like a good time on a very interesting topic. Wish I could have been there to see it go off.

I played the scenario when it first came out. But I modified the DD OBs to divisional bases to cut down on how many ships we had to push. The Brit DDs through luck, smoke and generally bad visibility managed to get in close and torpedo the German BCs and the Bluecher. The BCs were able to break off, but Bluecher having less underwater protection was more affected and could not escape. I forget how many of the Brit PDBs were sunk exactly, but it was at least three. Both sides claimed victory but the ship VP was barely in favor of the Germans (the BCs were deemed crippled). My advice to the good guys (I'm a bit biased) is to use the 2nd DF extensively. You are going to lose them to the Med in any advent and why should the Channel Fleet care about helping the Med?

I'm surprised the Germans felt deterred by the the 3rd Cruiser Squadron. Even Bluecher with her DCT is a match for 3 Devonshire class cruisers. In the event the German BCs were slowed considerably, but not enough to prevent them breaking contact with the 3rd BS and the horrible visibility prevented the approaching BCF from ever seeing them. Bluecher on the other hand could not get away from the 3rd BS and was sunk by them.

The Brits IMHO need serious luck with the (reduction of) visibility or the Germans with their greater speed and DCT will rule the scenario. Also IMHO the loss of the Brit heavy ships is not really important as pointed out above. But the loss of their crews is. The older ships were useful for providing training and experience to the Reserves and as a bank for hoarding sailors until they could be posted to new construction. Obviously if they are dead or maimed they can not provide crews for the new construction as it is completed. I'm thinking of changing the victory points to punish the Brits for throwing away ships' crews by not disengaging damaged ships to preserve the crews. Maybe full Ship VP for crippled ships and 1.5 ship VP for ships sunk. I know, the scenario favors the Germans enough as is; but Britain's waning manpower was very much a consideration by this point in the war.

Also tagged with one or more of these keywords: Fleet Action Imminent, HISTORICON, World War I, GQ3

0 user(s) are reading this topic