After Action Report for

This scenario was played three times over three days at Historicon 2022 held in Lancaster PA July 21-24 2022.

Game writeup as seen in the program

Description: Stepping back from nuclear war over the Cuban Missile Crisis, the U.S.S.R. has launched a conventional war in its place. Category A/B forces are flooding across the border.  While NATO awaits resupply of men and material.  A desperate US Army fights to stem the Red onslaught unfolding in central Germany. Can you stop the Communist Army?  Or will you command brave motherland forces driving hard to the west? Your choice.  Come play Mein Panzer and test 1960's tech in the heat of battle.

No experience necessary. Quick play/learn rules. Under 12 if accompanied by an adult player.

The battlefield as shown above and in pictures is a 10 foot by six-foot rectangle.  North is the six-foot table edge with the large village at its end.  The other compass points are the remaining three battlefield edges.  Toward the southern end of the battlefield there is a farm with several building and fields.  The fields provided light cover and was considered rough terrain for vehicle movement.  There are dual railroad tracks running west and east with a crossing in the middle of the map.  Hard top roads are crossing the map diagonally in an "X" pattern with one road crossing the railroad track in the middle of the map.  There are two clumps of trees (one on the eastern side and the other on the western side) that are considered dense forest.  Additionally, there is a line of trees following the railroad that is passible but does block all lines of sight from north to south.  A two-level hill forming a small ridge line dominates the northwestern portion of the map while a mix of four or five one-level hills are scattered throughout the battlefield.  A small water obstacle and a scattering of trees and small bush like feature complete the terrain layout of the map.

This game is designed to be a meeting engagement running north and south of the map with both sides ordered to cross the railroad tracks located in the center of the battlefield and push on as far as possible.  (see map above)

Note - This scenario was designed to be flexible and able to play with 2, 4, or 6 players.  Depending on how many players show up at the prescribed time I will adjust the units to fit the players.  Additionally, the WarPact players do not have dedicated Forward Observers for their one artillery battery.  WarPact Center command has told the battlefield commanders there are four pre-plotted fire points (of their choosing) where artillery can target.  Additionally, the company commander of each tank company can make a NON-FO call if the need for artillery is clear.

The game was designed for six players (three on each side).  However only four out of the 6 showed up for this time slot.  Three of the gamers had never played MP and one had but many years ago.  This is not a big issue as convention games go you usually have people looking to try a new game.

So, I adjusted the "players" as needed.  Units from Player 1 and Player 3 (see Forces above) were deployed for both NATO and WarPact sides. 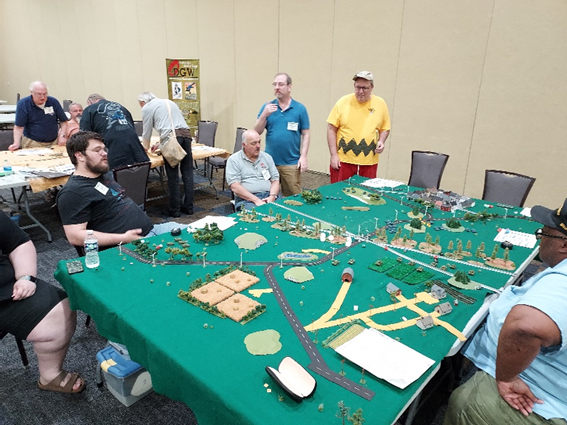 The players were eager to maneuver their units and the game turned into a “Who can get to the RR tree line first”.  Once there both sides were in knife fighting distance.  The Leopard1 pushed through the tree line first only to be dealt a loss of two tanks to waiting IT-1s on the ridge line.  NATO then lost the next turn initiative and the T-62s open up on the now exposed Leopards.  Even the advantage of soft cover from the forest did little to blunt the blow as two more Leopards fell. 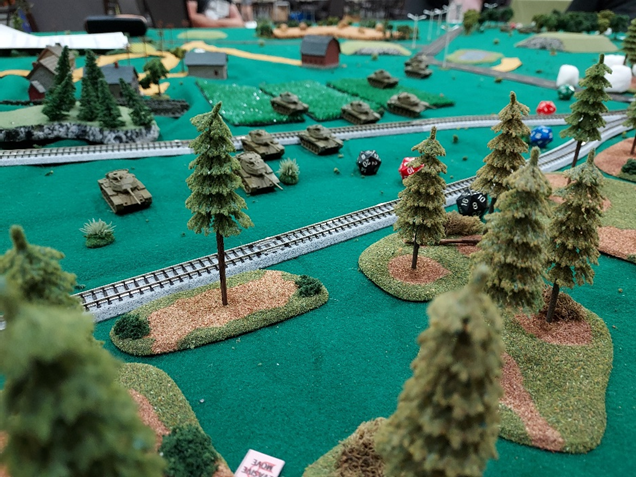 The final turn the last Leopard perished from a cavalry like charge from the PT-76s as they made a mad dash to cross the RR tracks.

On the other side of the road the WarPact player decided to await the NATO thrust in positions of over watch hoping to catch the same luck that his comrade obtained.  In doing this the WarPact commander lost sight of his objective and failed to advance past the RR tracks.

End of Game - By the time the game was called neither side had achieved their objectives. NATO was close with M60A1 threating the eastern flank while WarPact forces were in control of the western flank and PT-76s ready to stream across the tracks.  It would have been dicey to see the western flank once the M60A1 punch through the forest.  The use of Artillery was not very effective in this game as accuracy seemed to plague both sides

All players agreed they had a fun time with the rules.  However, the scenario could use a little work.

The time frame of 1963 Europe with armored vehicles that have no "special" armor to defeat HEAT rounds meant that whoever fired HEAT and hit was pretty much had an automatic kill.  Both sides found this to be true almost immediately.  MP usually does not count ammo especially on ground vehicles.  I as GM don't care for this as it's just one more thing to track.  However, both sides agreed that limiting HEAT would be good for the overall scenario.

The meeting engagement scenario was thought not the best for this time period.  One recommendation would be NATO on the defensive with prepared positions to fall back upon with swarms of WarPact vehicles driving in.  Most players recommended I change the scenario to this objective vice the meeting engagement.  As GM, I agreed that was a valid and typical scenario for this time period, however that was not why I built the scenario the way I did.  My experience with convention and running games has shown me that players (esp. new players) want a fast fun game where they attack and kill everything.  I feel like a defensive game where one side waits on the other to come to them and the other side driving into a meat grinder is not fun for all.  (my 0.02¢)

Lastly, the terrain setup really stymied both sides.  The forest line running along the rail road was ruled to completely block line of sight.  The idea was to force both sides to move forward and engage the enemy.  However, this turned into whoever was brave enough to pass through the wood line was smacked hard and the player was truly demoralized.

After reflecting on the players comments and discussing with other ODGW staff I made a couple adjustments for the next two games.

This game five players out of six showed so I took command of WarPact Player 3.  A company of PT-76 and Artillery awaiting my Comrade General orders!  One player returned from yesterday's game and took another swing at the objective.  He was happy to observe the changes in the scenario that was recommended the day before.

The scenario objective remained the same.  The primary difference in the setup was 1) the tree line along the railroad was changed to allow line of sight for long range cannon and missile fire and 2) limiting HEAT round to three per vehicle.

Picture one shows the modified map layout and players. 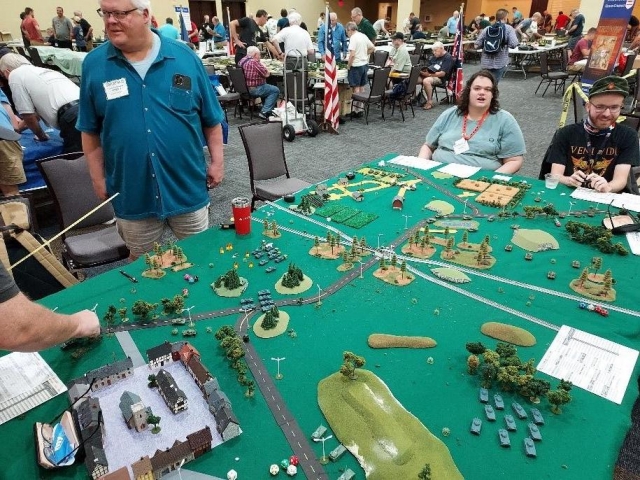 Picture two shows one of the M60A1 platoons taking the brunt of the WarPact long range shots while the second platoon maneuvers in the background. 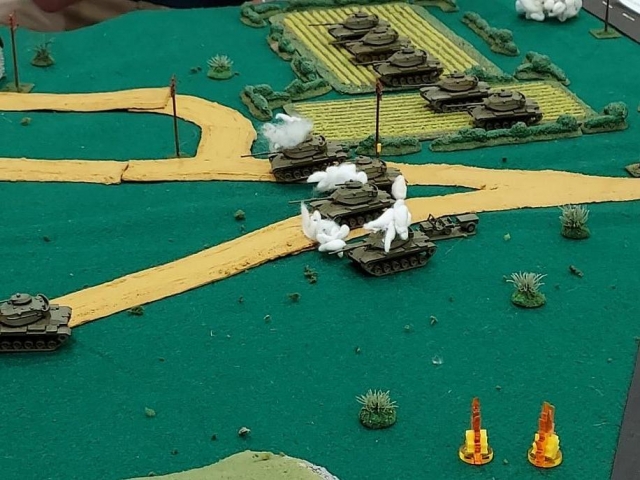 Picture three show the T-62’s firing on the M60A1 while the IT-1s move along the road to get into over watch positions with T-55s following up.

Pictures four and five shows the contested railroad crossing.  Platoon of Leopards sitting just outside an artillery barrage while a company of T-55 arrives at the top of the photo.  The game was called due to time and players had other commitments

The scenario outcome felt a lot better that that of game one.  While neither side crossed the railroad track (with one small brave jeep driver/FO determined to be the first to claim WarPact territory.  He would be the first to cross!!  However, only ~250m (5 inches) on the other side of the forest was the surviving T-62s ready to send him to a gulag!!  The game was grudgingly called a draw at the end of the turn.  The railroad / hard top crossing in the center was akin to Checkpoint Charlie in Berlin the year previous.  Leopards were stopped by a well-placed artillery.  While WarPact forces were moving into position.  Would they cross the track or hold in overwatch to kill more Capitalist? 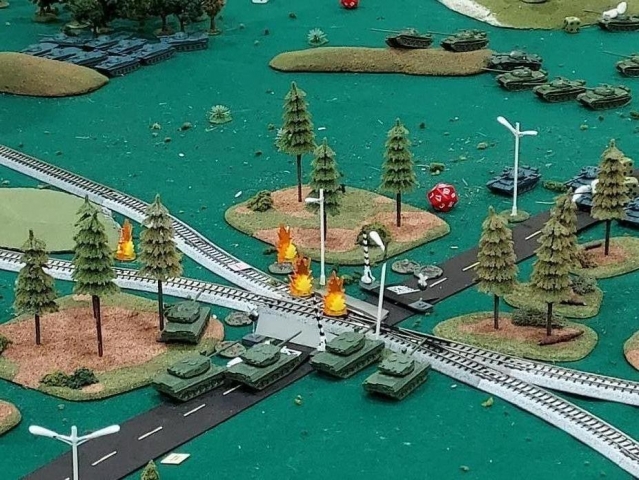 This game we had all six players who signed up for the game show.  So, all I was required to do was GM. (Huzzah!)

The scenario objective and terrain remained the same with no changes from game two.

The limitation of HEAT (i.e. tracking ammo) seemed to not bother the players however, they really didn’t want to track shots.  So, they decided early on to use AP for the cannon fire.  The missile tanks (IT-1s) didn't have that option.  While there were a few suppressions and one immobilization the kill rates were still satisfactory to all.

WarPact forces were much more aggressive in this game jumping out toward the objective early.  While NATO was content to maneuver to high ground and flanking the enemy.

The M48 were receiving side shots from T-62s while Leopards and M60A1 were making quick work of the IT-1s.  NATO requested a smoke fire mission from the M109 artillery to abate the communist fire.  As the second platoon of M48A3 made there was carefully through the woods.  The M60A1 commander decided to drive one of his platoons through the vineyard unaware this would cause a bog check (MP rule for rough/hazardous terrain).  One M60A1 threw a track and was immobilized (The GM ruled that it might be repaired with a successful TQ check next turn).  The WarPact T-62 were able to attain hull down next to the RR Tracks however, the Leopards were quickly able to defeat them (with some incredible dice rolls!!) as they popped outta the wood line.

The IT-1s were able to whittle down the M60A1 platoons.  There were three mobile M-60A1 (plus another immobilized) on the eastern flank.  The remaining 2 IT-1 were out of missiles (unknown to NATO player).  The T-62 company died gloriously and destroyed three of the five Leopard 1s and a M60A1.  The T-55 company was at full strength and ready to leap across the RR tracks however, the platoon of five M-48A3s were laying in wait on the other side of the woods.  On the western flank of the battlefield the PT-76Bs finally swarmed the remaining M-48A3.  Their HEAT rounds able to punch NATO armor with ease.

Finally, in what can only be describes as the “Charge of the Light Brigade” the surviving BRDM-2 made a crazed dash toward NATO rear lines!!  This caused the commander to break up his battery of M109 to dispatch a platoon (three) SP howitzers to deal with the “threat”.  A valiant effort by the “Heroes of the Soviet Union!!” (Awarded posthumously…)

The game was called a WarPact win with over whelming forces remaining and a pretty much mauled NATO force that had little chance other than to retreat.

Final Observation and Thanks

The weekend tripart of games were well played and everyone agreed they had fun.  The modification of the terrain layout and ammo restrictions helped balance both sides and enabled a good bit of movement.

I’d like to thank all the players and folks who stopped by to watch the games.   See you next time!! 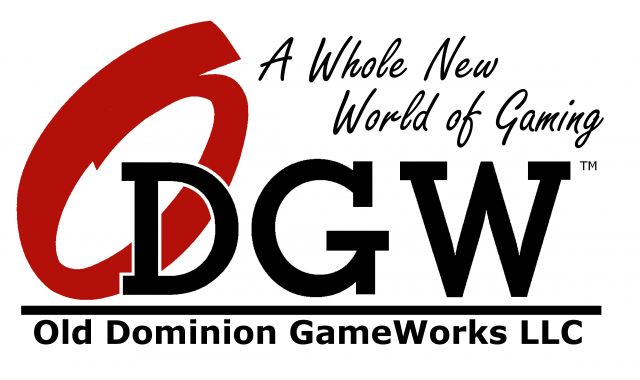 Regretfully had to miss Historicon this past go around due to work. Hope to be at the next one and participate in an ODGW MeinPanzer hosted game!

Same here, which proved unfortunate. Would love to have seen MP played with "modern" gear. Maybe Fall-In or next year.