why is USA armored infantry so small when comes to platoons

It’s unclear to me whether you are referring to “scaled” data for game purposes, or actual TOE. An actual 1942 US Army rifle platoon was typically around 40 men organized in three “squads” of 12, with a command of 3-4 (a 2LT and a couple NCOs).

US Army Armored Infantry formations had less manpower than equivalent formations in Infantry Divisions.  This was because some of their manpower was devoted to their vehicles (driver/mechanics and vehicle commanders) and because they had far greater firepower per man and so, in theory at least, they didn't need as many men.

As I have recently completed a US Armored Infantry company for my gaming forces, I thought I might return to this old thread to post 'em up, to inform, entertain, or perhaps just bore those who see the topic and open the thread.

The original post makes reference to the US Armored Infantry platoon, so let's start there: 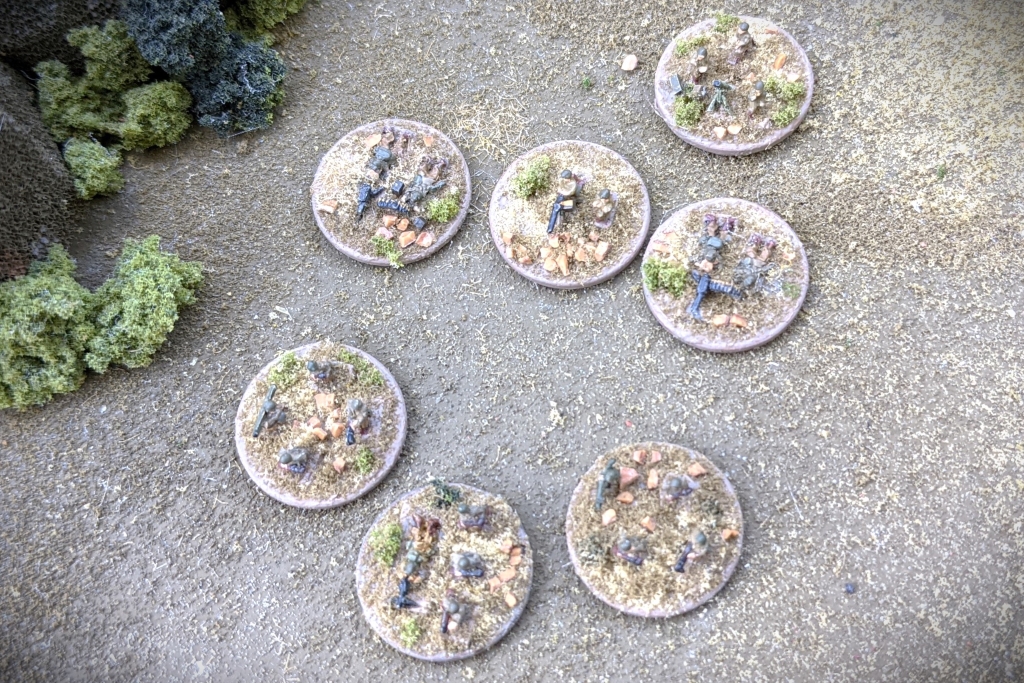 The platoon consisted of 3 rifle squads, an MG support squad with 3 MGs (2 x .30cal, 1 x .50cal), and an 81mm mortar squad.  Here you see them all dismounted and ready for action.  Figures are from H&R, mostly their (older) US Infantry and US Support Weapons, with a few BAR gunners from their (newer) US Paratroops pack. 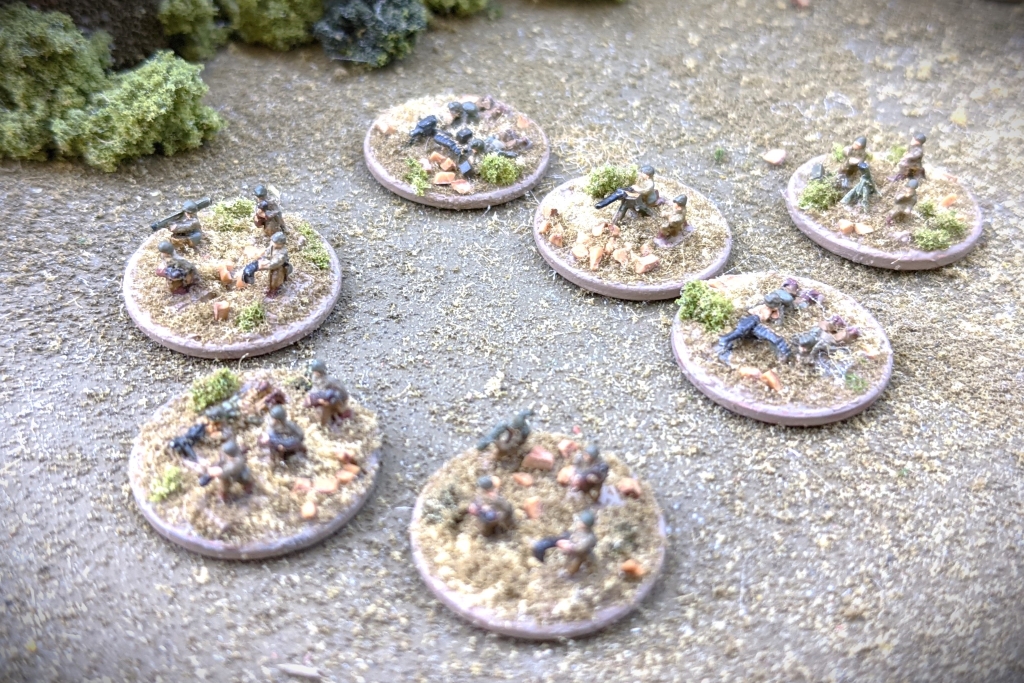 Each squad had a bazooka.  They often carried 2 x BARs per squad. And they had the MG mounted on their halftrack.  But typically it was only the MG support squad that dismounted the MGs from the halftracks for ground combat, as the rifle squads sought to more tactical mobility when on foot. 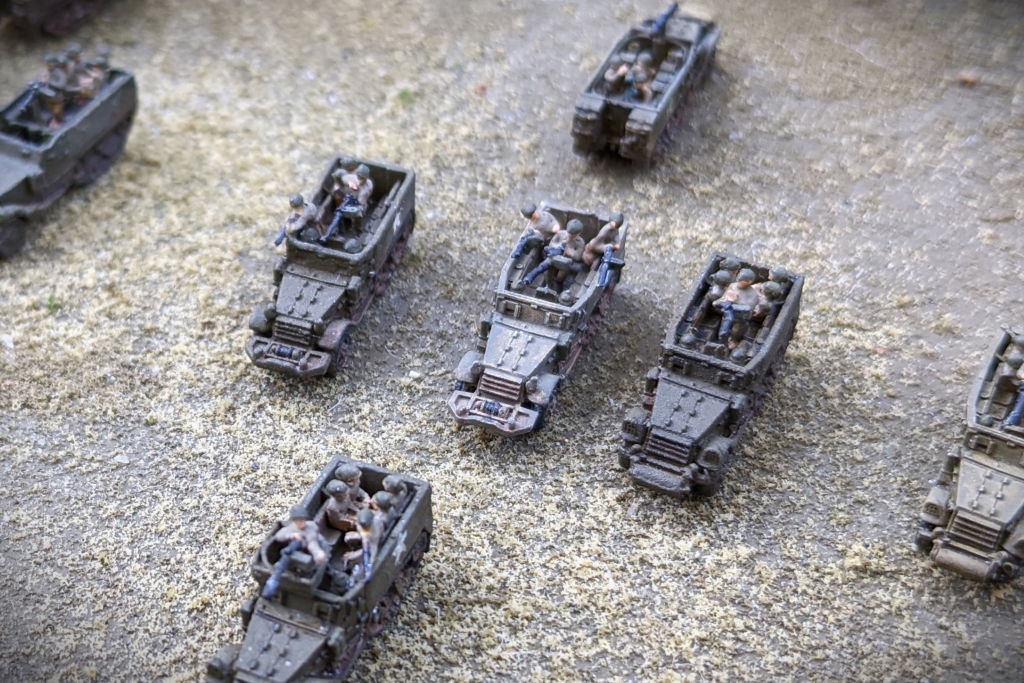 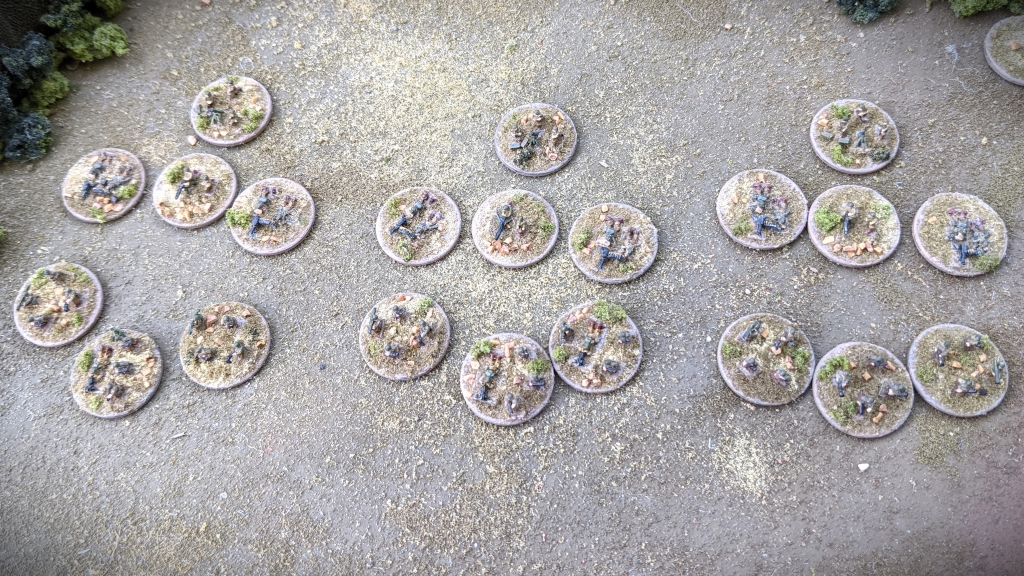 The Company had 3 platoons. 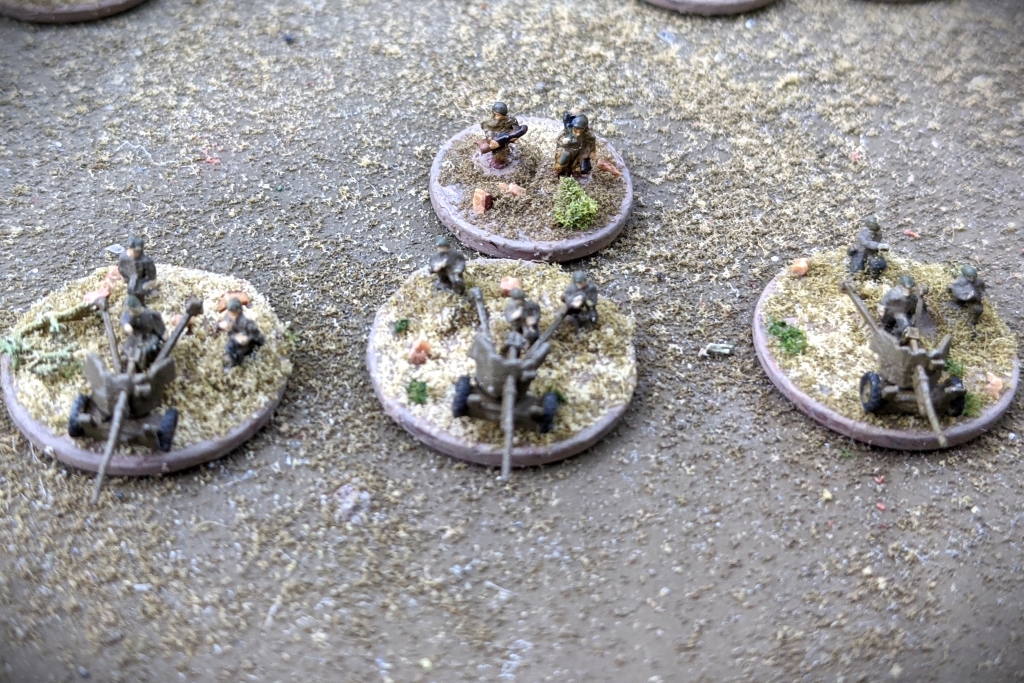 The Company also had an AT Gun platoon of 3 AT guns.  These could be parcelled out, 1 to each platoon, if the Company CO wished. 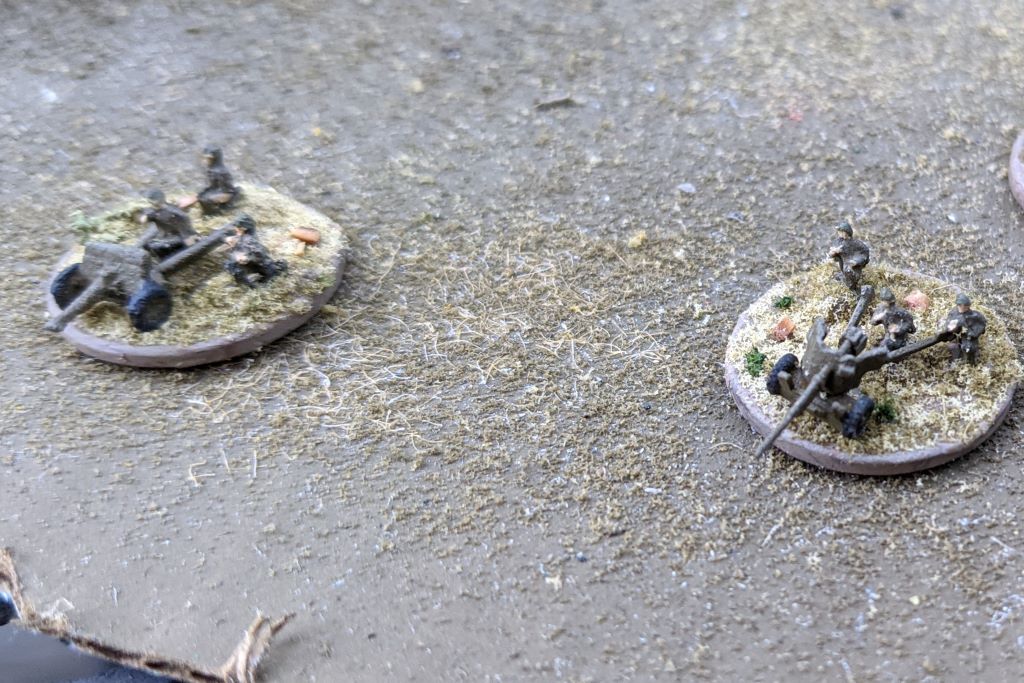 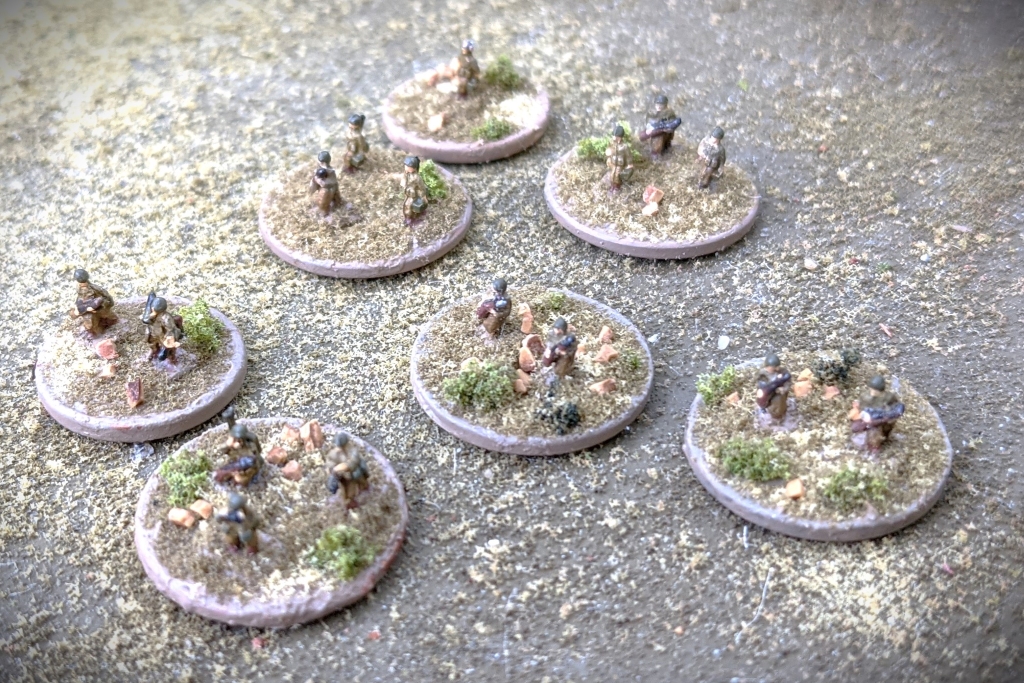 The Company HQ had a full squad to support the CO and the XO, including RTOs (radio telephone operators), and maintenance and supply sections.  A medical orderly (medic) was usually attached from the Battalion Aid Station. 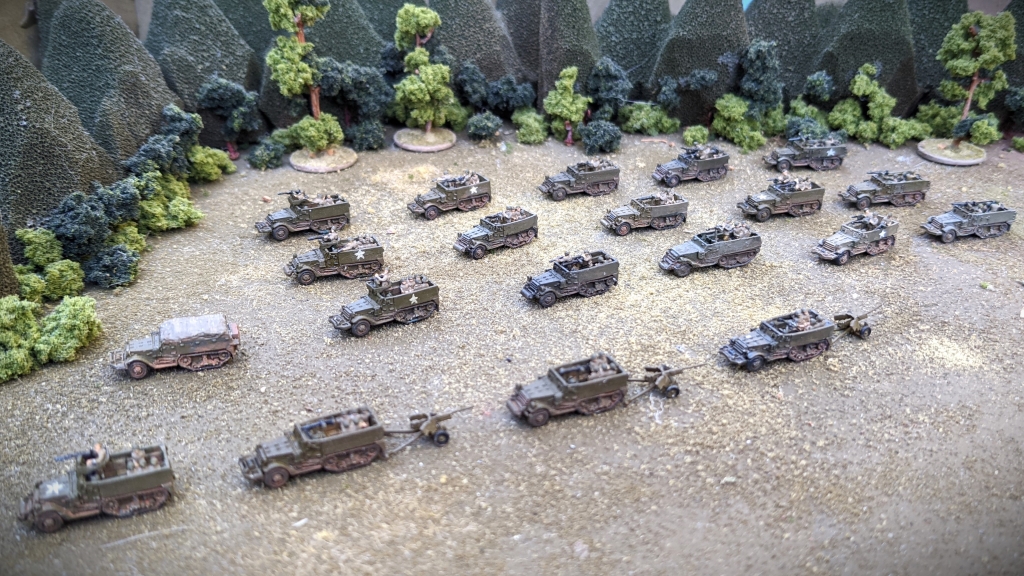 The whole Company makes for a pretty large force when it rolls onto the battlefield.  Vehicles are all GHQ.  Figures in the vehicles are almost all from the GHQ Armored Infantry packs. 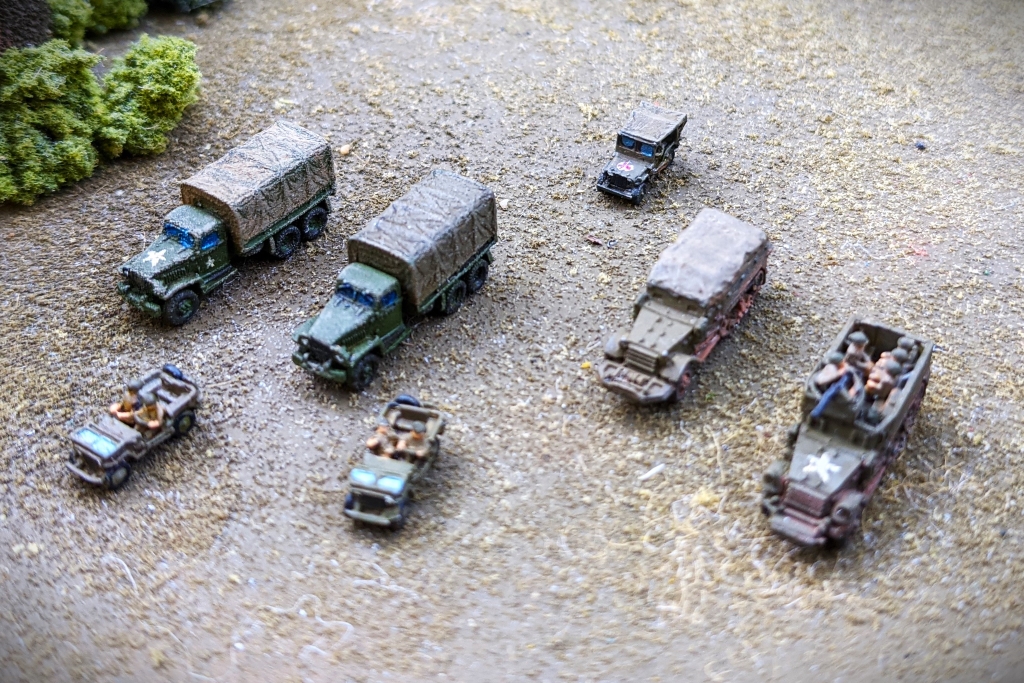 How much of the HQ platoon rolls on to the battlefield can vary.  If combat was expected much of the HQ would typically remain with Battalion, or at the designated rally point.  Figures in the jeeps are H&R kneeling gun crews with their legs cut off below the knee.

So there it is.  Given bazookas in every squad, so many automatic weapons, 81mm mortars in each platoon, and the embedded AT guns, I don't think there was another infantry formation in the war that had so much firepower at the platoon and company levels.  Should be a real beast to face, although it is also a bit of a beast to build. Pretty much requires building two companies (vehicles and dismounts).   But I like 'em.

Thanks for the kind words, Kenny.

I probably should have described my basing approach in the post above, to give readers an extra clue as to how to decode what they are looking at.  Better late than never, so if you are still scratching your noggin' about the captions to some of the pics (particularly the dismounts), here is now I base my forces.

I base on US Pennies (1 cent coins).  These are about 19mm in diameter. They are cheap and plentiful (I can get 100 for $1, and I can always fish between the cushions of the couch for a few extras if I run out while trying to finish a unit).

It is important to understand that each stand is not necessarily modeled to show the exact number and composition of the troops on that stand. Rather, they are just representative.

Here is how they are organized and what they represent:

- I put 4 figures on a stand to represent a "standard" rifle squad.  If all the squads in the unit are the same, then the actual models don't really matter except for the look of it.

- I put 3 figures on a stand to represent a "special purpose" squad.  Here the figures might matter in identifying what kind of squad it is.  If you look at the HQ platoon pic, you'll see three different 3-man stands. One is the HQ squad, as can be observed by the RTO and the figure with binoculars.  The other 2 are squad-sized groups, each with a rifleman figure and two figures carrying ammo boxes, representing the maintenance and supply sections (who would be armed with M1 carbines).  You will also see that the 81mm mortar stands and AT guns have 3 crew figures, as these were 8 - 10 man crews (full squad sized), but were not standard rifle squads.

- I put 2 figures on a stand to represent a support team / half-squad. For the platoon's MG squad you will see 3 MG stands (2 x .30cals, 1 x .50cal) that have 2 figures.  These represent smaller 3-5 man MG gun crews.  In the HQ platoon you will also see a few 2-figure stands. These are the XO with an RTO, and 2 vehicle crews (jeeps, trucks, whatever).  Several vehicles which might not have a squad of men might need to have their crews represented.  The medic is based singly, just to make him a bit more obvious to my eye at game time.

My platoon leaders are with the rifle squads of the 1st Halftrack of each platoon.  So there are no separate platoon CO stands.  I identify HQ elements by placing dots on the back rim of the penny used as a stand.

The dots are generally done with a darker shade of similar tone to the dominant colors on the stand -- so with grass flocked stands this is usually a darker green.  It is very low visibility on the table to anyone but me, but from my position behind my force (it's on the back of the stand, facing me), and with me knowing that it means, it is quit easy for me to scan my force and see my command units.

Often I model or paint my command vehicles a little differently as well. In this particular formation I have used the HMG pulpit of the M3A1 halftrack to denote the commanders' vehicles, with the rest of the vehicles just getting the pedestal mounted MG of the M3 halftrack. Again, quite easy for me to find, but perhaps not entirely obvious to an opponent.

That might help y'all understand the pics a bit better. Or maybe it's just me yammering on for no gain. But if you are interested in at least one guy's approach, there you have it.

This is an awesome force! Thanks for sharing. You did a phenomenal job on the figure building and basing as well. They look great. Always been a fan of penny mounting too.