3 replies to this topic

Hello, How is everyone basing 1/6000 miniature ships. I am looking for Ideas.

Can't speak for everyone, but here are a few examples from our 1/6000-scale fleet cabinet: 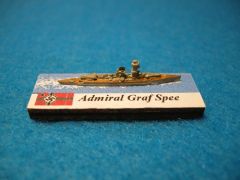 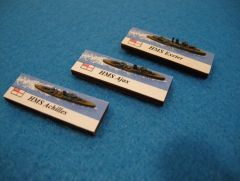 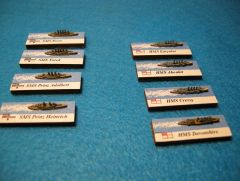 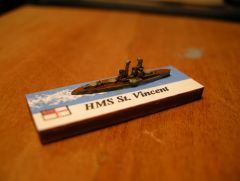 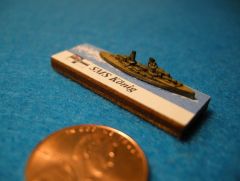 They look nice. Thanks

I don't base my 1:6000; Instead, I type out the ship's name and put its navy's ensign behind the name. I print the names and ensigns out on card stock, cut them out and white glue the result to the stern of the ship. The name helps stabilize the ship and makes it stand out. Part of why I do that (I also like the look) is that I use a 1:18000 scale rather than 1:6000. That is because it is a lot easier to do the math for 1-inch equals 5000 yards then 1-inch equals 500 feet. A byproduct of that is that the ships only take up one third of the space they physically occupy on the table. Because of that, I only check for collision if ships actually touch each other. In addition, the name being behind the ship helps the uninitiated to remember to space the ships out, so they don't rear end each other. Now ships still run into each other on occasion, fog being the normal reason they get into fender bending.

The exception is WWI destroyer divisions. I use clear plastic bases from Litko for these. I base those nations using divisions by division and the Germans by half flotilla. I then use the same concept, unit designation and ensign on card stock to identify the division/half flotilla. The other by product of doing it this way is that if you want to rename a ship for any reason, it's easy to do so and you don't have to destroy the current name to do it.