10 replies to this topic

I used to play Napoleonic to WWII Naval combat when I was younger (focusing mostly on Ironclads).

But recently I came into a lot of 1/700 Waterline ships (and, because I am a competent CAD and CGI Artist, I happened to start modeling some 1/700 scale ships that are not yet available in that scale).

But I notice that GQIII uses a 1cm=100yrds scale, which seems a little too small for the 1/700 ships (given that the CA and BB ships tended to keep a separation of 800 - 1000 yards, the size of the models increases that separation to around 2000 - 3000 yards - significant when it comes to tactical decisions and outcomes).

I know there are movement devices (the rulers with the turn-radius marked on them) that are made for a specific scale, so playing to another ground (ocean) scale, such as 2cm=100yards(Meters), or 1"=100yds would make for a better ocean-scale for 1/700.

But it would require rather large turn-radius templates (which isn't an issue for me, since I can print them pretty easily, given that I have Photoshop/Illustrator and access to a large-bed printer).

And, this would also require playing on a floor (which we used to do in Dallas, TX anyway), with maximum ranges being around 20 feet (And the USA did have a Doctrine of opening fire at extreme ranges to get hits from plunging fire).

Has anyone else tried the game with this scale?

I am planing to do some of the Guadalcanal Naval Battles (I have the ships for Savo Island and Cape Esperance (Save for a Pensacola/Salt Lake City - I should have those by October), and then maybe Leyte Gulf. That the Japanese tended to fight Night Battles will reduce ranges for Guadalcanal, though.

Those ships must be huge! Jeez. I play 1/6000 to utilize smaller table/gaming space.

I wouldn't call them "Huge."

Only the Yamato/Musashi/Missouri/Iowa/New Jersey BBs are anywhere near a foot long (technically they are just over a foot).

And, their size is the whole point:

Because you get this: 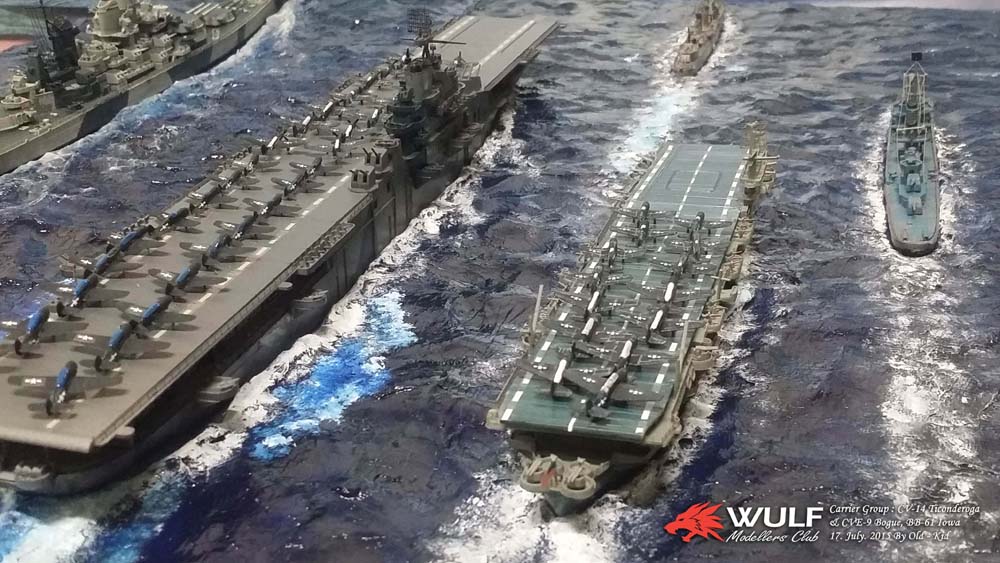 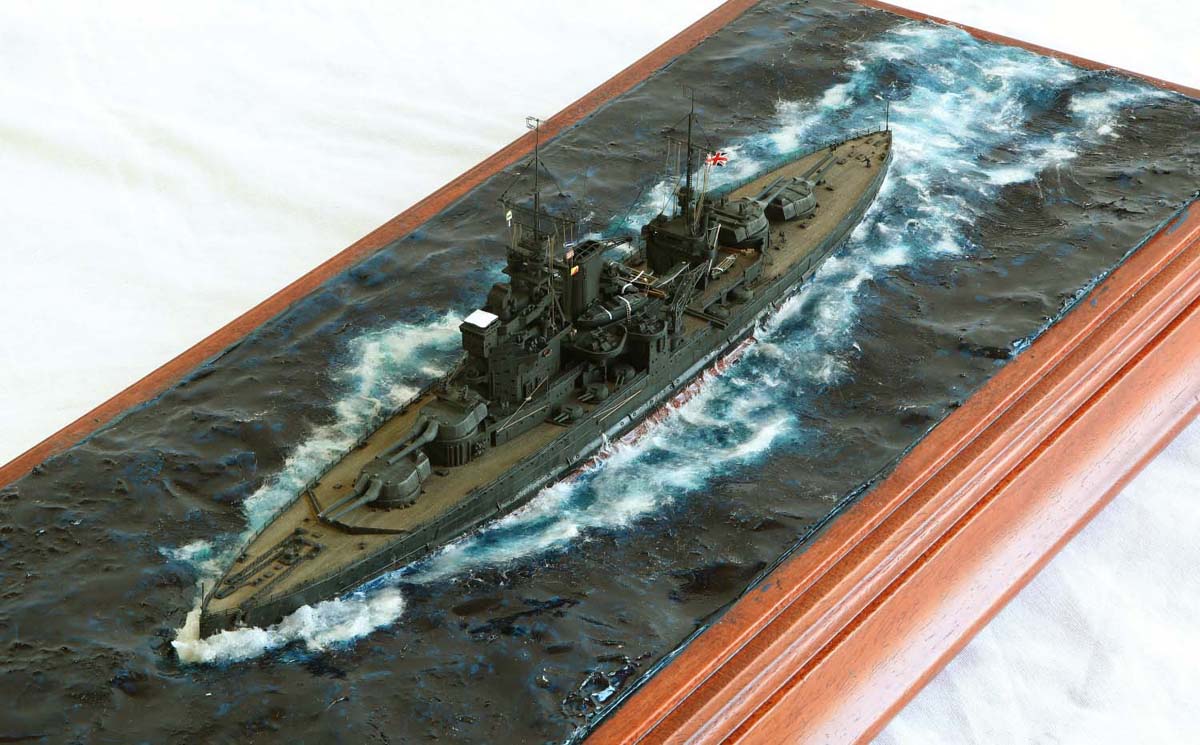 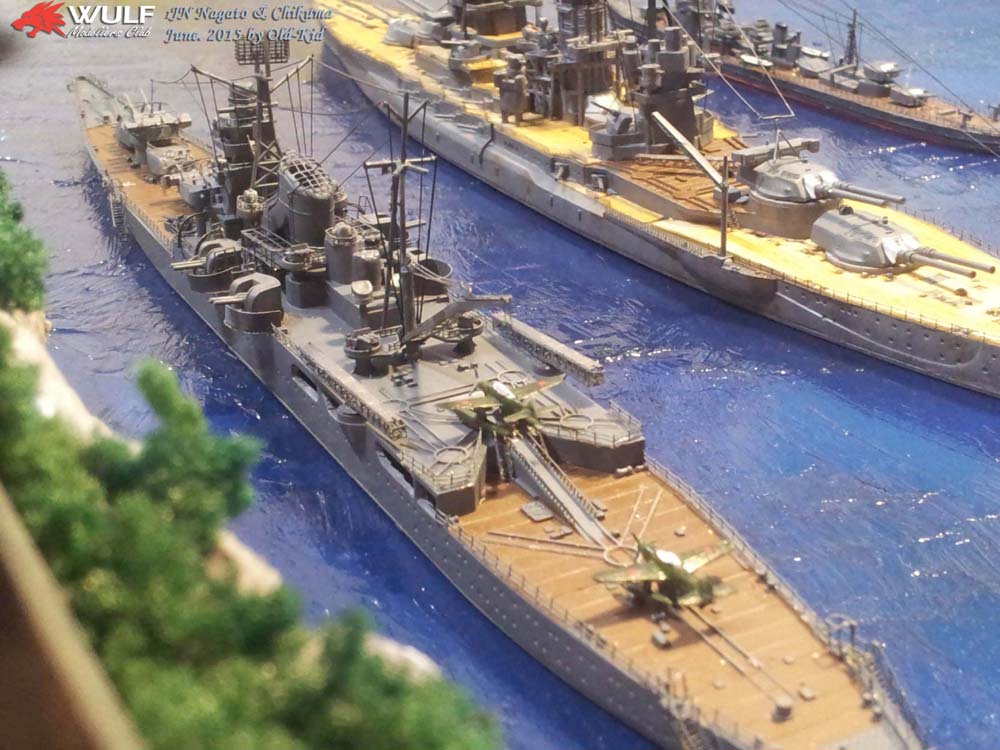 Now, admittedly, we don't do all of our ships to that level of detail (since the ships themselves are between $10 and $50 each, and the detail kits run on average about $25 - $50 each), since it would cost around $2,000 to do a single major engagement of the war (well, except maybe the Atlantic War, where the Germans operated ships independently as Commerce Raiders, and you have Naval Battles with only a handful of ships).

I hope to try to get to some conventions next year to run some games using them (I would like to do a Guadalcanal Campaign using 1/700 miniatures/models).

When playing on the floor, do you run into more instances of poor positioning? Without having an overhead view, I feel like someone's weakness in spatial thinking would become a lot more apparent. Is that true? I'd love to see an AAR or pictures of game in play.

I suppose that could be an issue.

I will be taking photos of the first game I play with them, but that probably won't be until around Nov. or Dec. with the speed at which I am building/painting.

But, I take that to be not a flaw, but a feature, as real ship captains often could not ascertain their precise positions IRL.

I know that previously, playing back in the 1980s with 1/1200 miniatures, this was not a terribly big issue.

I agree on that being a feature. Well, be sure to share progress and ruminations!

The "floating table" setup we use at Tactical Solutions might save wear and tear on the knees compared to the floor. Look I'm the AAR section for photos.

I had thought about using Tables, but even with a floating table, we would need more room than would be possible.

We would need to have 2x4 4'x8' tables just to have adequate room for long-range gunfire at a 1cm=50m scale (extreme range for Battleships would be 18').

Night actions could work with tables, but it would be pretty hard to reach the center of the table (I know from doing 6mm Modern and Sci-Fi games, where we used a ground scale of 1mm=5m that reaching into the middle of a 9'x9' table - two ping-pong tables - is nearly impossible, to say nothing of what it would be like for a 16'x16').

Chuck Delafield in Dallas (who was well known as a proponent of GQ) once mentioned this in why he did not use tables, and instead played on the floor (even at his age).

I will take a look at the AARs to see what they look like.

In answer to one of your original questions, a local group did a number of 1/700 naval battles out here on the left coast at West Coast conventions over a several year period using GQ III.  They made their own Ship Turn Indicators by expanding the 1:2400 versions in GQ III accordingly.  It took quite an area to play scenarios in 1/700, but they were visually quite impressive and always drew a large crowd.  They did several aircraft carrier battles (using 1:350 aircraft miniatures) as well as various surface battles.  Pretty spectacular to see and fun to play, but you did have to be a little careful where you stepped with a crew of gamers.

Definitely doable, but you do need a fair amount of space.

If you are worried about stepping on the ships, I'd think having each on a small stand would be the way to go.

I figure that with the larger actions (not just Destroyer and MTB Night Actions we have done so far), we would need room to get to around 20,000yards.

And for things like Surigano Strait, we would need around a 40' x 30' area. Definitely do-able at a convention, where we could rope-off a floor section.

I have also thought about doing some Ocean boards for 1/2400 scale, where I can do large gaming areas in the 1cm = 100yds scale, which show the actual curve of the Earth. I have C&C Milling tools available to cut interlocking terrain pieces that, when connected, create a domed arc-section of a sphere that would be 12' x 12'. That way, players could actually get a sense of the horizon, which is only about a meter away from the deck of a ship at the 1cm = 100yds scale (it would be roughly 3X to 4x that for the bridge or lookout of a ship).

I am surprised that no one has done this for the 1/6000 ships, where you can do a battle like Coral Sea on a large table.