2 replies to this topic

OK, my AAR from the WMburg Muster 2020 convention game.   Not to much in blow by blow details, but there are pics!!

The South has risen again!  The Nationalist Government of the United States has sent forces to Texas to secure the Strategic Petroleum Reserve and the refineries in Texas control.  However the newly formed Confederate States Government has other plans.  Units of the former Texas National Guard are dispatched to intercept the invading National Forces.  Fight M1A1 vs M1A2 as the North and South duke it out again after 150 years!

We only had one player (Greg) show interest in playing, however with a little arm twisting I was able to get 3 ODGW staff (Don, Mike and Tu) to play.  Don and Mike were Texacans and Greg and Tu were Federalies <grin>   This scenario is a meeting engagement and both sides drive on to the game table.  Texas from the southern boarder and US from the northern boarder.  (Duh!!)

Board setup looking west.   Farm in in the south western corner.  Note on trees.   Trees lining a road and those clumped tightly together are impassible and block visibility.  Single trees or those that have ~1 inch space are considered light woods and MP woods terrain rules apply. 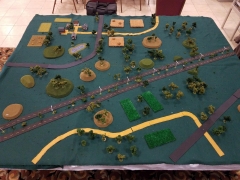 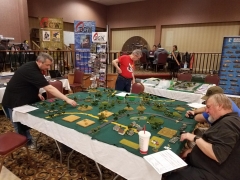 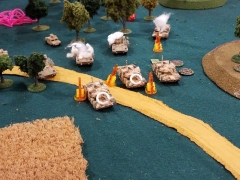 Action on the east side of the board.  2x Texas hiding in the trees occupies 2/3 of the US Army's Tanks for several turns 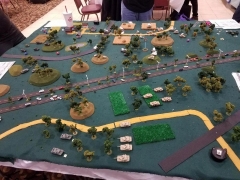 The TNG Apache flies in to rocket a US Bradley.  The Bradley survived the attack!! 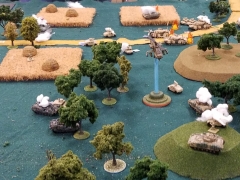 The game ended with a US Victory.  TNG had 2 surviving M1A1s, and few other vehicles.   Their artillery support (M109 Paladins) were the only unit unscathed.  The US A-10 Warthog attempted to strafe the TNG artillery but jammed its auto-cannon on the first pass and was driven off for one turn by well placed (die rolled) MG AA fire.   The US Army took their lumps losing 4 M1A1 with another 2 taken damage.
There were a few tweaks that I am going to incorporate next time and maybe give "Intelligence briefings" to each side making them aware of the additional tactical options their forces can give them.
We'll see what happens at Cold Wars!!
Hope you enjoyed.

Looks like great fun, Kenny. Do you guys have a modern-era data book you’re working from? Hope to see you guys at Cold Wars.

We're working on one....  I have the base numbers to playtest but nothing official in print.

Looking forward to see you at CW.