52 replies to this topic

There was a tutorial showing how to play MP that had Russians and Germans but I am unable to find it. Could someone please help?

It would be nice if the good folks at ODGW would consider doing a tutorial sometime.  I might consider it but I have some house rules I use that reflect my own preferences.  How about it, ODGW?

This was a great tutorial as it went through a number of turns showing combat and being in and out of command and had pictures. Where did it go?

You might be thinking of these in the AAR subdirectory of the Lounge:

Sadly, I think the image links have gone to vapor.

I'll talk to Bob and see what we can come up with.

I think this would be a very positive addition.

Might I suggest, if it is done, that some thought be given as to what is demonstrated in the tutorial(s).

My own ideas would flow towards a few tutorials, each showing a different aspects of game play. Each tutorial might show all the activations within one turn, so that each tutorial also reinforces the basic game turn mechanism.

The starting core might be tutorials on the following:

4)  Artillery v. tanks and infantry.  A mixed tank and infantry force in some sort of defensive role, vs. an attacking force that might be maneuvering into position (not yet engaging), but with an AOP and off-board artillery batteries. Give both sides something to do (maybe some vehicles or infantry moving up into position, or withdrawing back), so that multiple activations take place quickly with little complexity, before the artillery lands.

I think this base would give any new player a big boost in getting into action.  Probably reduce the support questions as well.

Then, over time (and depending on interest) a few more may be added to show some of the more advanced features and drop-ins:

5)  Combined arms.  A combined infantry-and-armor force attacks an infantry defense with AT guns.  Could be a replay of 3 but with a combined arms attacking force rather than all tanks.

6)  Structures.  Infantry in 2 or 3 different kinds of structures, attacked by a combined arms force.  Could be a replay of 5 in a village.

7)  Engineering works.  Maybe mine fields, entrenchments, etc. Again could be a replay ... I could see 6 & 7 being based on the same forces as 5 -- essentially replays with their own extra drop-in added.

8)  Air strike.  Just like 4 but with air instead of off-board arty.

9)  Amphibious landing.  Ooftah. I don't even know... that's a big one.  But it would be a good read. A river crossing might be easier than D-Day.

You might enlist your community to do some of these, but I would suggest ODGW oversight / approval for posting in a particular tutorials thread or even forum.  The idea is to get it right, not have someone else's mis-reading of the rules corrected in the after-comments.  After the core tutorials are in place, a separate thread or threads on house rules could be added.

Yeah I know, that guy sure does drone on ... yadda yadda. But it's a good idea that spurs some creating thinking.

Maybe I should switch to decaf...

I would also like to see some sort of tutorial. I have the rules but haven't found anyone I know locally who even knows about these rules let alone played them.

Also, not sure how many folks visit this thread/forum, but to anyone who does....

If you have Tabletop Simulator (from STEAM) I'd be willing to set up a map with some units if someone who knows the game would be willing to go over the basics.

Tabletop Simulator is $20 on STEAM, but can be on sale often for $10. There are a TON of mods for all sorts of mini and board games.

I would be happy to discuss this with everyone.  We like the idea and want to see it come to focus.  The problem we have is no one has the time to actually create the tutorials.  Bob and I are writing new DBs (yes it's really true) and we have other commitments that preclude from this.

If anyone has the spare cycles chat me and I can contribute with any clarifications and guidence.

Well, I have the time, but sadly, I've never actually played a game of MP

Excited to help in anyway I can.

Just sent acctingman69 playsheets for German and British forces for a basic game (tank vs tank).  He'll create the game board and layout then we'll start the game.

If anyone has questions or suggestions on how to create the tutorial I'm all ears.

acctingman69 and I finally were able to pull together a basic game (tanks vs tanks) online.  Using discord to have an audio chat and Steam's TableTop Simulator we proceeded to get thru 4 turns on a 72 x 72 inch table before we saved the game to continue another day.   Acctingman69 has a couple friends also interested and now that he has the basics down I'm sure he will get them up to speed on game play soonest.

Either of us will keep this updated to let you know how the tutorials work out.

Thank you, Kenny!  I may set up and do a solitaire game at my house soon.  I have not played Mein Panzer for about 3 years but looking to start back up.  I have been doing a lot of painting though and have some Shermans and Panthers that will need some battle testing. 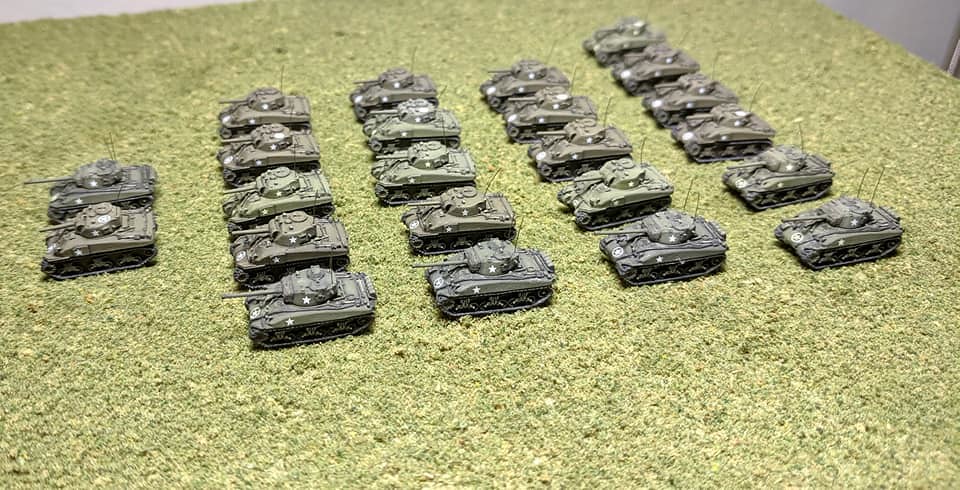 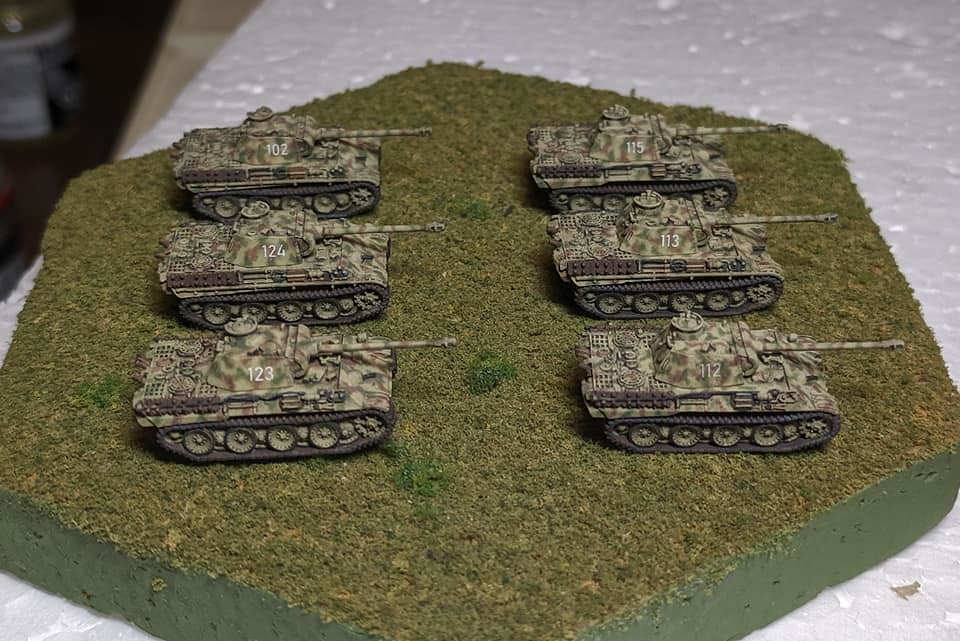 Has anyone been playing Mein Panzer lately?  I have not played since 2018 when I ran a demo game.  I will be setting up a simple solo game in the near future and hope to post some pictures and commentary as to what is going on.

I believe Mein Panzer to be a very good set of rules that hits the sweet spot of detail and ease of play for me.  After a solo game or two I may go down to my local FLGS in the Phoenix area and see if I can get some interested players.  I have the armies, the terrain, and the rules.

We've played here in VA a couple times this year.  Have a convention in July (Historicon) that I'll be running 2 MP games.  Also ODGW is hosting a Game Day at our local game store Dragon Fire Comics in Stephens City VA next month.

So yes a few games are being played.   <grin>

Thanks, Kenny!  I am happy Mein Panzer is still being played.  I think they are a very good set of rules.

I plan to run a solo game soon at my house to get back up to speed with the rules.  I will post some pictures and maybe do a commentary tutorial.

Finally!  I am getting ready to run a solo game of Mein Panzer.  This will be an ongoing tutorial of sorts whereby I point out the rules as I use them and provide plenty of pictures showing the game in progress. I have set-up the terrain and have selected the forces I will use for this game.

This scenario, which is not strictly historical, takes place on the Russian Front in August 1943 when the Soviets are going on the general offensive after Kursk.  A breakthrough has occurred and the Russians are racing to seize 2 bridges over a minor river.  The Germans have put together a company of tanks to stop them.  This will be a meeting engagement and feature use of the advanced rules for tanks and command but no infantry, artillery, or anti-tank guns will be used for this scenario.

Here are a few pictures of my layout using GHQ Terrain Maker.  The game is being played in 1/285th scale aka 6mm. 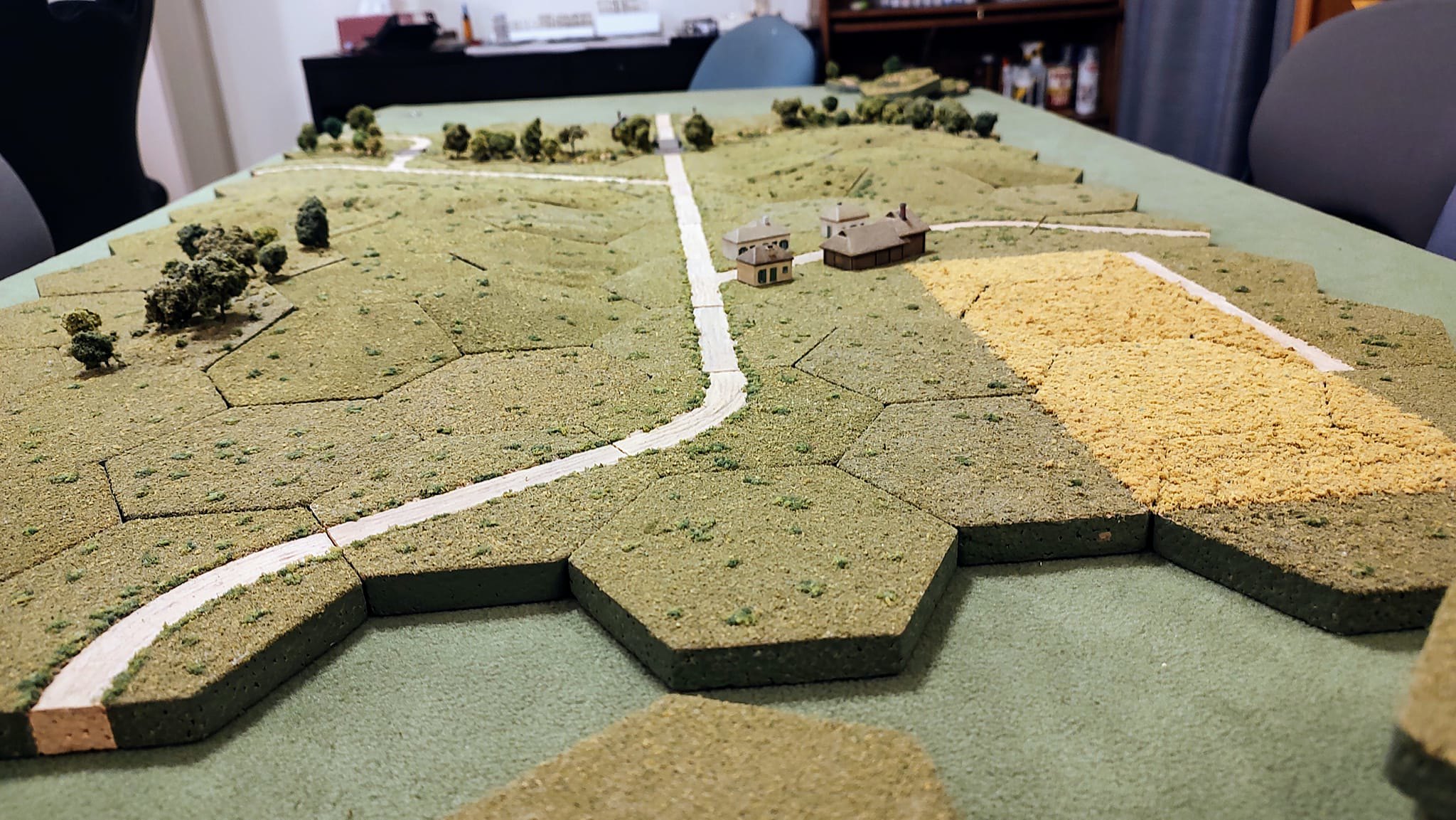 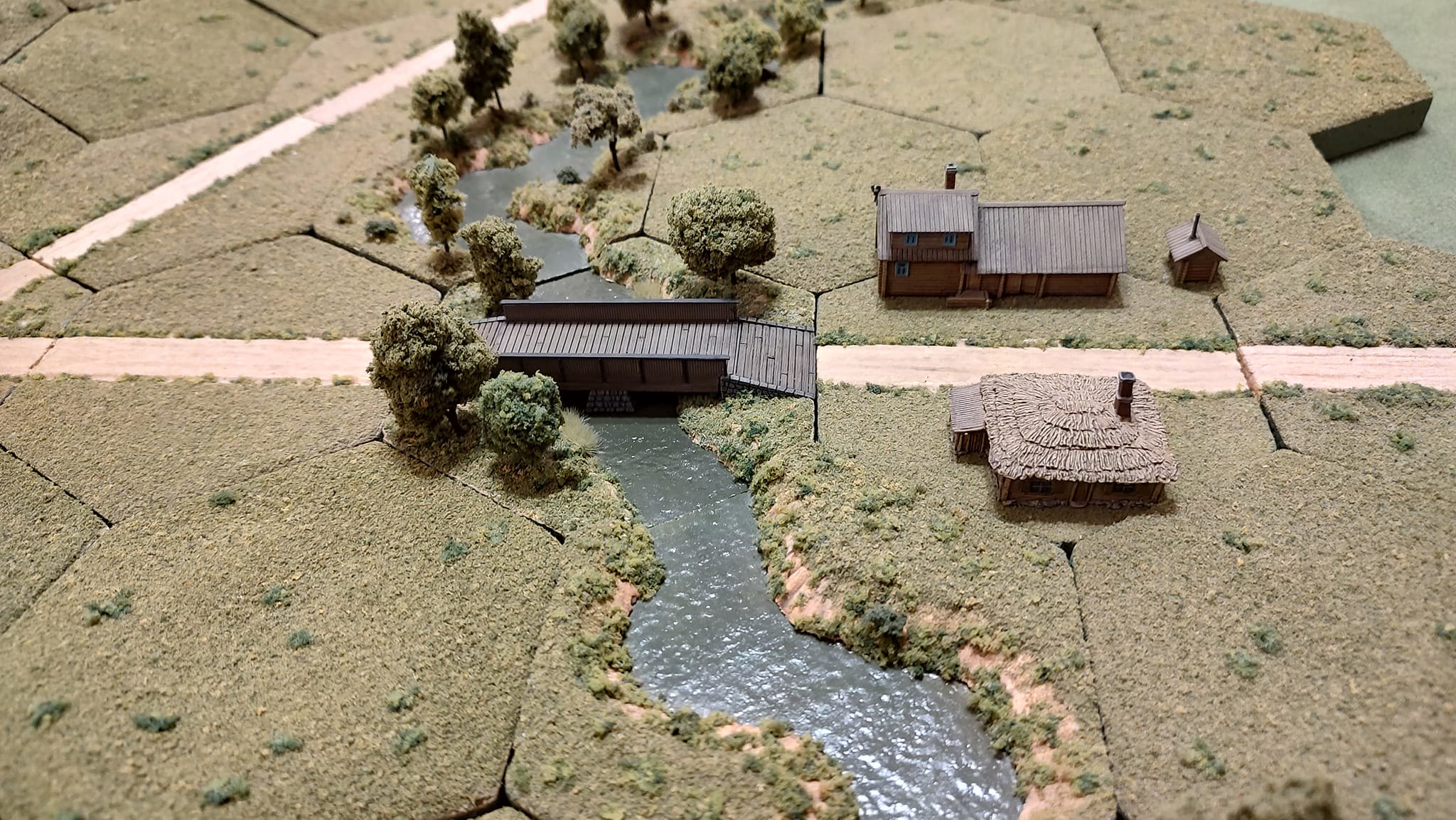 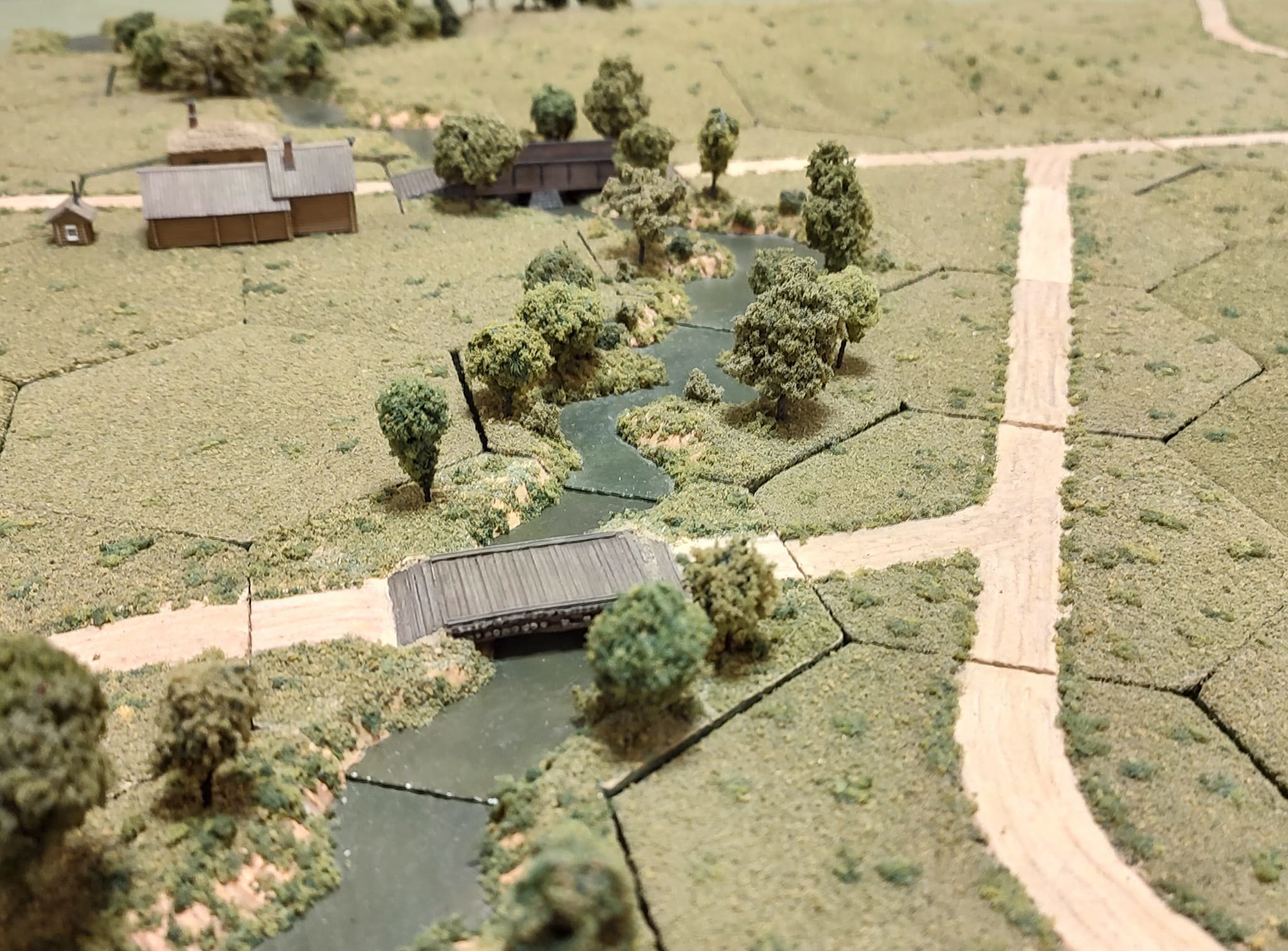 The pictures show the table covered with flannel to keep the terrain tiles from sliding around during play, a view from the German side, a view from the Russian side, and the two bridges.  The total layout is 4' x 2'8".

Thanks for doing this, Peter. The table looks brilliant and I look forward to a blow-by-blow description of how things progress (presuming that's your intention). Very little of the MP we play here is historical, so no worries. I'm sure I'll learn a ton.

Back to The Core Rules