Been looking for a replacement power-pack for my Dremel MiniMite. An incredibly useful little tool, it's small, maneuverable, and powerful. Among many things, I use it frequently when trimming down bases. Score the plastic, snap off the excess, then round off the corners with the Dremel. Results are quite good.

But now it exhausts a charge in ten minutes or less. It's fifteen years old, so I have no gripe, but I was hoping to keep it going. A search of the internet yields no compatible replacement. Contacting Dremel earned no sympathy, nothing. Apparently the packs for the new version don't fit the old, probably having moved from nicad to lithium. I guess when it finally dies I'll just pitch it and get a new one.

Ugh, I hate throwing stuff away.

A friend of mine was reading my post on another forum regarding the impending death of my Dremel MiniMite and dropped one off as a replacement. Seems if you whine enough, people go to extraordinary measures to shut you up. In any event, thank you.

So I was goofing off, familiarizing myself with this somewhat newer version. I used it for basing this 1/2400 Viking Forge generic fishing trawler: 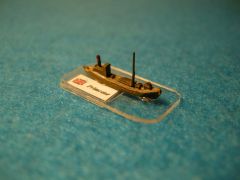 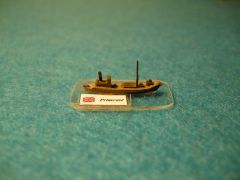 A homemade base made from a bit of thick acetate...not the best, but serviceable.
Healey 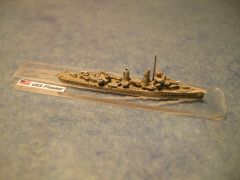 No specific Measure here, instead intended as an experiment with light grey and an ink wash. Once again I seem to have diluted the wash to the point it had little to no effect on application. I'm just not getting the hang of this. 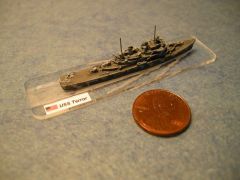 1/2400 Viking Forge casting on a ODGW etched base. Measure, I'm not sure, but taken from photos of Terror in 1942-43. Yet another experiment with ink wash... 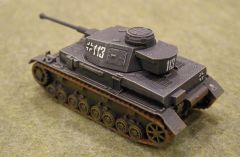 Numbering script has a bit of Russian mojo...

Had to whip up some armor to fill gaps in an OB for one of our SeaLion scenarios. I have a pretty decent pile of CinC 1/285-scale microarmor accumulated over the years, which I've always been a fan of Randy and his work. Here's an early Pzkpfw II, as it would have appeared in France or Britain (had the Germans invaded): 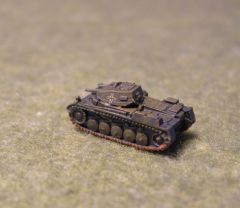 CinC recently sold their line of microarmor and 1/2400 ships to a Canadian company, leaving Randy to carry on with his 1/4800 naval line and the sci-fi stuff. Looking forward to some new sculpts from him.

I used decals from Microscale, which I had mistakenly thought had gone out of business. In fact, they are still around, and produce three sheets for 1/285-scale, (one German, one Russian, and one for US Army).

After seeing these last two submissions, a buddy of mine pointed out that the Germans only put numbers on the turret sides of their tanks. National insignia went on the hull sides. Not necessarily true for the early-war period, but a fair criticism none-the-less. So I challenged him to apply them to the hull side on a 1/285 Pzkpfw II and show me...haven't heard back yet, lol. 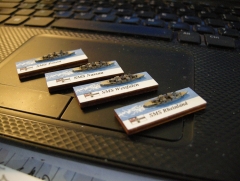 Figurehead castings on homemade bases. Slowly building out the HSF. 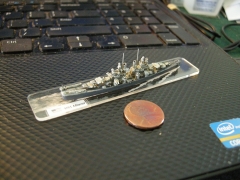 A 1/2400 Viking Forge casting with a couple of guitar-string masts added, on an ODGW etched base with a homemade label. The casting was none too sharp (especially the gun-tubes), and fitting the turrets was quite fiddly (ten in all). Still, a nice rendition for the game table.

Going through a few boxes of old stuff, found this model of the Soviets' Kiev from around 1977-78. Was still in college at the time. 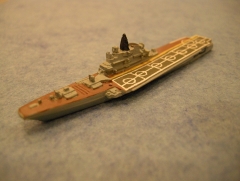 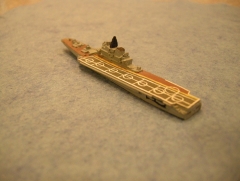 I don't remember who manufactured the figure, but I'm pretty sure it's 1/3000-scale. I seem to recall painting the circles with a broken-off toothpick (which accounts for the unevenness).
Whatever, I'm mostly amazed it has survived. According to the Wik, Kiev is now part of a theme-park in the PRC...how ignominious.

Fortunately, a lot has changed since the 1970s, and you can now buy nice decals for your flight decks. I've bought a few from these guys, both WWII and modern vintage. They work well, and I've used them on Viking Forge and CinC 1/2400-scale stuff, as well as the recommended GHQ.

Some cutting/trimming, along with a bit of MicroSol, makes a decent job of it. Applying them to a light base-color works best - a dark color will distort/darken the decal finish. If you're gaming Philippine Sea and all of those carriers, this might be a good way to go, lol.

How do you represent air units on the table? For the longest time I've used 1/2-inch counters with airplane silhouettes on them, and that actually works fine, but recently I've been poking around looking for castings to use.

I picked up some PicoArmor at Historicon a few years back. At 3mm, it scales out at roughly 1/600. Considerably larger than my 1/2400 fleet, I figured a bit of forced perspective would work, but I think they look a bit too big. Here's a PicoArmor He-111/H-6 torpedo bomber coming in on the deck: 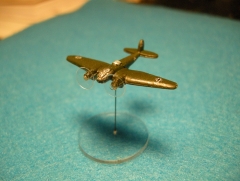 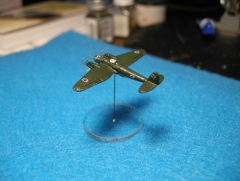 Even at 1/600, this little project was quite fiddly for a ham-fisted goon like me, and in the end it's pretty fragile. It's painted with Tamiya and Vallejo acrylics, with a base made from a Litko clear-plastic disc and a short piece of guitar string (wire). The decals are by FlightDeck. I punched a couple of "spinning props" out of a piece of acetate I had laying around, then drilled a hole in each which I tried to slip over the hubs. I was going to paint the hubs yellow or red, but haven't done it yet for fear of creating a big blob on the acetate.
I've been struggling of late with glues and matte finishes. I have been using Loctite GO2 for most projects, but that wouldn't work here for some reason, so I went back to Loctite super-glue.
I can't find any clear matte overspray that gives me a nice flat finish. I was a fan of Testor's ModelMaster clear matte, but that's no longer being made (at least I can't find it). Nothing else I can lay my hands on seems to provide that good dull coat. If anyone has a suggestion, I'm all ears.
Anyway, this was a lark, I suspect, not likely to be repeated. I have a few 1/1250-scale by CaP Aero which I might try, although I don't think I have any decal sets suitable for that.

HMS Ark Royal, as she might have appeared in 1914: 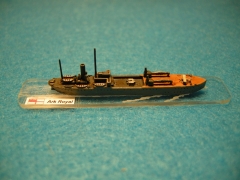 It was tough to find details of her scheme during the war. My understanding is that her "flight" deck was teak, while her aft decks and hold were steel. She served primarily in the Med, so her hull would be a relatively light gray. In some photos her uppers appear light, some dark...I went with dark.

This is a 1/2400 WTJ print. I added her main mast and the "jib" at the stern. Some photos show a large collapsible crane just ahead of her bridge, but I left that off (collapsed). Acrylic paints and wash, ODGW etched base.

Very nice work on the Ark Royal!  GHQ has announced their new list for the rest of 2020-21.  I was pleased to see the HMS Canopus and the HMS Otranto on the list.  One of these days I will paint the British and German fleets for Coronel and the Falklands.

Thanks Peter. I still need to find a clear matte that works for me. A mate of mine has a lifetime supply of Floquil clear-flat in bottles, but I'd have to bust out the airbrush for that, and I hate cleaning the airbrush when I'm finished with it (lazy, I admit it, lol).

HMS Canopus was a very cool ship, one of the older pre-dreadnoughts. After her time on the South America Station, she served in the eastern Med, similar to Ark Royal. Lots of action during the Dardanelles campaign. Definitely a worthy addition to the lead fleet.

I look forward to both these ships.  For my clear matte, I have been using Testors Clear Flat Lacquer.  This is basically the same as their Dullcoat but the name is now changed.  I mix it with some lacquer thinner and spray it out of my airbrush as it gives me more control than a spray can.

I've been pretty unmotivated of late; spending more time reading and writing than painting the ever-expanding lead pile. In a fit of nostalgia-driven exploration, was plowing through the fleet cabinets over the last few weeks just looking over the contents. Found this 1/2400 Hipper-class heavy cruiser by Superior from some forty years ago. Looks like it had an Arado floatplane added at some point. Decided it deserved a nice ODGW base, label, and an air-req decal from I-94: 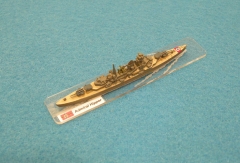 There's another one in the bin, unpainted, along with a 1/2400 Gneisenau and a handful of Narvik-class DDs.
Oy, close the drawer, lol.
Healey

Hi Healey!  The Hipper doesn't look too bad for such an old model and is well painted.  I did the Hipper that is in the GHQ catalog a few years back.  I am no longer painting for them and that has enabled me to concentrate on more of my own stuff lately.  More Shermans are on the workbench right now.

I also go through periods occasionally where my painting motivation is lacking.  Sometimes I just do it anyway and sometimes I do other things.