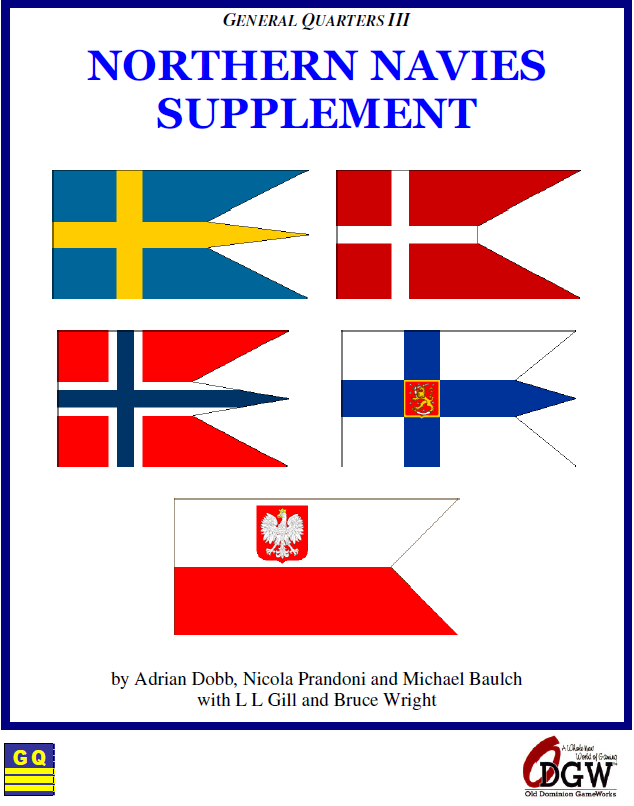 Old Dominion GameWorks is proud to announce the availability of an additional supplement to expand the navies for General Quarters III. This is our 2012 freebie download to GQIII registered owners.

The Northern Navies Supplement (NNS) made available all the major and minor navies that participated in WW II and 1930s naval combat. In addition to the major navies covered in GQ III, these supplements provide articles, Ship Logs, combat CRTs, aircraft Formation Cards, CD (Coastal Defense) Cards, etc. for the following navies: China, Denmark, Finland, the Netherlands, Norway, Poland, Portugal, Romania, Siam, Spain, Sweden, the USSR as well as the Cherry Trees (the major ships scrapped as a result of the Washington Naval Treaty). We believe this quite an unprecedented achievement. In each case, we provide ready-to use Ship Logs and Submarine Logs for each navy - far in excess of what other naval rules have provided. With the NNS, we have completed our coverage of the '30s and '40s, with the possible exception of the Greeks and South American navies.

The NNS specifically covers Denmark, Finland, Norway, Poland and Sweden. It begins with another fine article by Adrian Dobb and contains all the Ship Logs, Submarine Logs, and Formation Cards, CD Cards and CRTs and listings of small craft needed to cover all but the most elderly museum pieces. [And boy, did these navies have some museum pieces!] In addition to a hypothetical just for fun scenario between Finnish and Swedish armored coastal defense ships, the Supplement also includes five scenarios of major actions in the 1940 Norway invasion, along with a mini-campaign on Forcing the Oscarborg to seize Oslo. To support these scenarios, Mike prepared some great detailed maps of Narvik and Oslofjord and I added new Ship Logs for all the Kriegsmarine and Royal Navy ships involved as well as three sheets of merchant ships involved in the 1940 operations. Thus, the NNS provides considerable coverage of the 1940 Norway campaign in addition to the northern navies themselves.

How does one download this? I own GqIII, purchased at a game store, but I'm not sure how I become a registered GQIII owner, or where I go for this. Thanks.

You can visit our Product Registration submission link. Once submitted and verified, you will be granted access to the appropriate download area.

Dec 29 2012 12:25 PM
There shoiuld be a green piece of paper along with the charts and other inserts, that has registration info, along with the code you need to use to get registered.